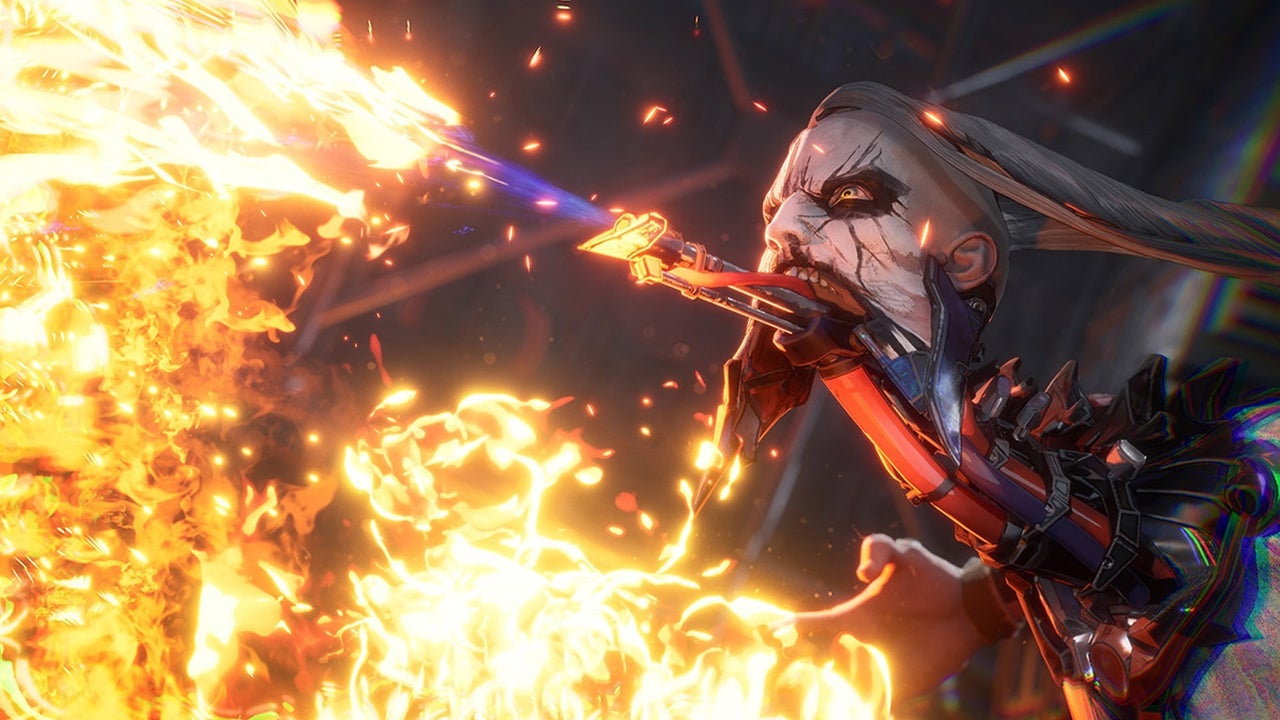 oozes style from the seams. This 4v4 objective-based action game wears its heart on its sleeve and isn’t shy about comparisons to Overwatch, but it tips its cap to Street Fighter just as much. After sinking 10 hours into the closed beta this past weekend, I’m sold on its ferocious close-quarters battles and diverse lineup of characters, though Bleeding Edge still needs to work on nailing the camera and ranged combat, and encouraging good team composition.Nothing piques my interest in a hero shooter quite like a colorful cast of characters, and the weird and often loveable “fighters” of Bleeding Edge scratch that itch perfectly. The limited-time beta, which ran from February 14 to February 17, had 11 playable fighters, each filling either a tank, healer, or damage-dealer (DPS) role with three special abilities, two choosable charged super moves unique to that fight, and lively personalities. They’re an eclectic mix, ranging from Maeve, an Irish grandma who has a habit of cackling at the death of her enemy to Gizmo, the sassy Australian junk-tech with a fondness for building killer robots. Everyone got a test drive, but given the time constraints, I focused on learning the ins and outs of a couple of favorites.My main pick is Daemon, a graffiti artist DPS with a devotion to the blade who quickly rose above the rest in my eyes. He’s an absolute viper who’s able to dash in, slice some poor sod from stem to stern with his sword, then vanish before the rest of the enemy team knows what hit them. Setting the pizzazz aside, Daemon’s playstyle accentuates the fluid, third-person melee combat that makes Bleeding Edge stand out among its hero shooter peers.

Living on the Edge

Bleeding Edge referring to its cast as “fighters” is appropriate because combat sure feels like a fighting game — just with eight combatants rather than two. Uppercut an opponent to the jaw and watch them fly backward into a wall. If they catch you in a combo, use your sword to parry their follow-up, breaking their assault. Falling flat on your butt is no big deal because a get-up attack will quickly put you back in the enemy’s face with force. I beamed from ear to ear at the symphony of chaotic thuds from all the bodies flying about during team fights. There’s even a training mode (a staple of fighting games) where you have free reign to experiment with a fighter’s toolkit on practice dummies. It’s mighty useful.

Every Xbox One First-Party Review

In a particularly intense match, I realized just how deadly Daemon could be even with the deck stacked against him. Zero Cool, (a character described as a Brazilian pro gamer with a healing touch) was doing a great job of keeping the opposite team alive during team fights. His teammate, Nidhoggr, a black metal guitarist always looking to trade some licks for your life, was serving as a bodyguard for the healer. The pair were keeping watch at a capture point during a game of objective control, while I lurked in the shadows nearby, but Nidhoggr made the mistake of straying a bit too far from Zero Cool. I popped Daemon’s cloaking ability, sprinted in, and unleashed hell on poor old Zero Cool, carving off half of his health bar in the blink of an eye. Nidhoggr noticed me and bolted back, wildly swinging his axe guitar to and fro, but I dodged with a well-timed evade. That’s when I activated Shadow Strike, Daemon’s ultimate, and the rapid series of strikes minced the injured Zero Cool into dust and shaved off most of Nidhoggr’s health, too. He tried to escape, but a couple of shurikens to the back took care of him.

I realized just how deadly Daemon could be even with the deck stacked against him.

Thrilling melee brawls such as this, unfortunately, come with a big caveat: Bleeding Edge is all about close-quarters combat, so it’s disappointing that the camera struggles to keep up with the lock-on mechanic. It’s incredibly disorientating when your target is bouncing around from one end of the arena to another, making the perspective frantically swing every which way. Even worse, in one instance, the entire enemy team was wailing on me in a corner; naturally, the camera thought it was oh-so-important for me to see the inside of my character model at the time. Of course, lock-on isn’t mandatory, but in my experience, most encounters are a chore without it. When I didn’t lock-on, all I did was fiddle about with the camera, trying to keep up with characters that can quickly zip around.

Usually, healer characters are my jam, but playing as Zero Cool didn’t hold a candle to Daemon for me. In theory, he’s perfect: he’s a ranged fighter, so he experiences none of the camera wonkiness from up-close fights. Unfortunately, Zero Cool is the antithesis to everything fun and fresh about Bleeding Edge. Not once did I enjoy watching a battle unfold from afar, topping up allies with a cliche healing beam, occasionally chipping away at enemies with his pitifully weak pistol. He plays a bit too much like Mercy from Overwatch – specifically, the version of her after she was significantly nerfed.

Zero Cool taught me that ranged combat isn’t fun in Bleeding Edge. Match momentum is about pushing forward, scraping by by the skin of your teeth to secure an objective, and thrashing any fool that gets in the way. So while everyone else was doing just that, I’m stuck observing it all from a medium distance. Close enough to heal, but not far enough away to employ any sort of interesting ranged tactics and too weak to effectively snipe. “They’re too far away!” Zero Cool constantly shouts at me, “I need to get closer.” That insistent barking serves as a reminder that ranged attacks straight up don’t register if you’re too far away. It’s an awkward middle ground, where you shouldn’t be in the thick of a fight, but you’re severely limited tactically at range. The distance seems to vary depending on which fighter you’re playing as, but all the same, Bleeding Edge is not a snipers’ paradise. There was a tinge of irony to Zero Cool’s cries to get closer. I echoed the sentiment internally; not being in the thick of a fight was hideously dull.

Sadly, I had to adopt the healer role more often than I would’ve liked because Bleeding Edge commits the cardinal sin of not having a role queue. Role queues make sure you have a viable team composition by locking a player into a specific role, so if you chose the healing role before entering matchmaking, you must fulfill that role in the next match. If you’ve ever lost a match in the early days of Overwatch because no one on your team was willing to bite the bullet and play something other than a DPS character, you know why the exclusion of a role queue in Bleeding Edge is a massive bummer. Both game types, objective control and power collection, encourage team fights through centralized capture points. Once the teams clash, whichever has the better role balance is likely to be the victor. I begrudgingly had to choose Zero Cool several times for no other reason than my team would get steamrolled by the opposition without that vital healing pillar of the holy trinity.

Even with a couple of blemishes present, I still had an absolute ball with the Bleeding Edge beta when I was able to go on the offensive. Sure, the lack of a role queue is a massive oversight, and I didn’t much enjoy the ranged combat, but I’m excited to clash swords with more of the cast and uncover all their mechanical intricacies in the second beta session that begins on March 13. Be sure to check back for the full review for Bleeding Edge right around when it launches on March 24.