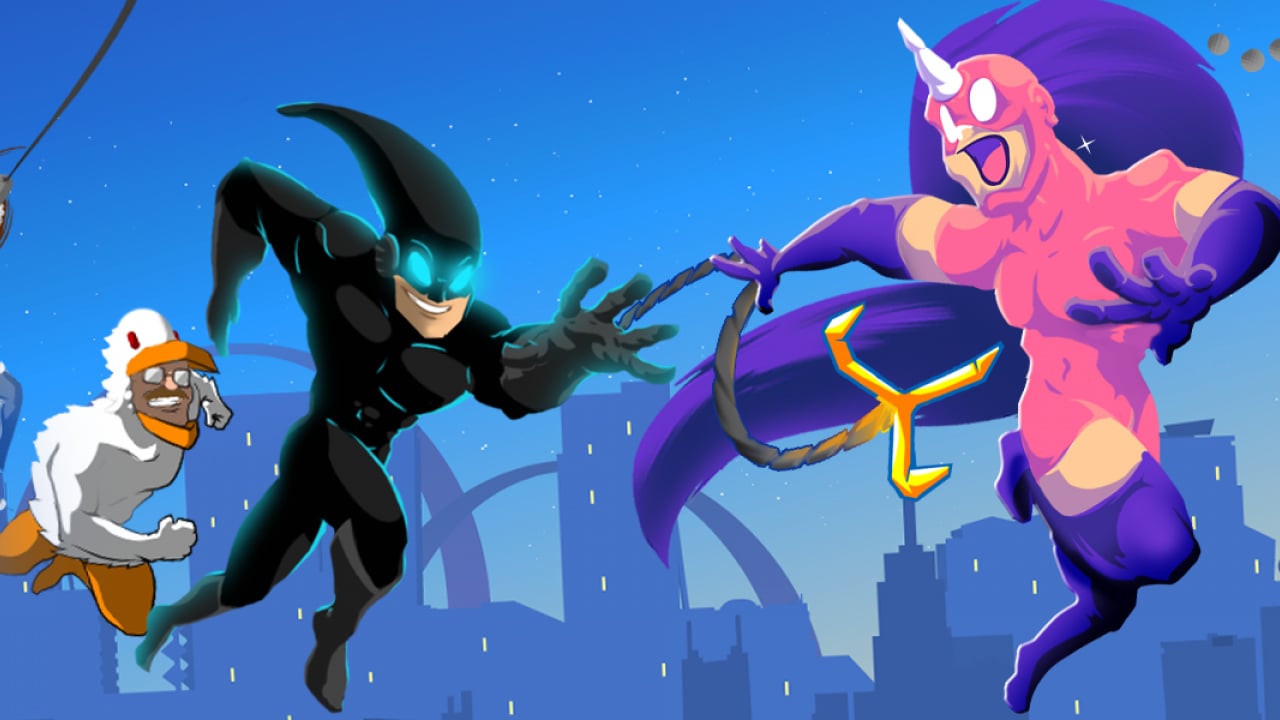 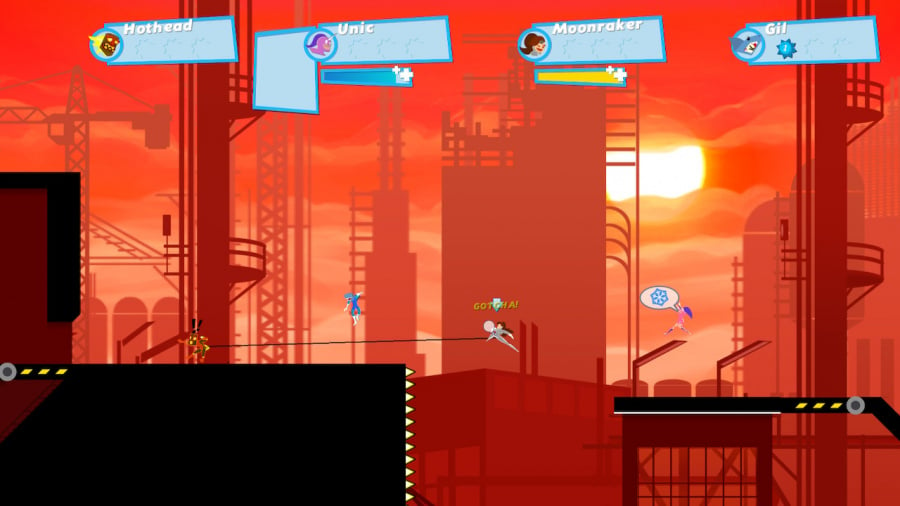 Ah, the classic superhero. Humble. Brave. Selfless. A beacon of hope to us mere underpowered mortals. And, as it turns out, massively competitive as well. Because in a city full of other metahumans, there’s only so much justice and glory to go around. So that means any super-powered persona in the vicinity is going to have to move like The Flash to get to the scene of the crime first. It’s a neat little concept, and one that makes for a very satisfying and instantly enjoyable multiplayer racing experience.

SpeedRunners is a 2D platforming racer started life as a free Flash game (which you can still play here) before eventually making the jump to PC and the haven of indie excellence that was Xbox Live Arcade in years past. Developer DoubleDutch has given the game a few licks of new paint over the years, but the core premise has always been there – four players each pick a super-powered avatar and race through a variety of 2D courses that demand quick reflexes, platforming acrobatics and sneaky abuses of your talents to keep yourself one step ahead of the competition. 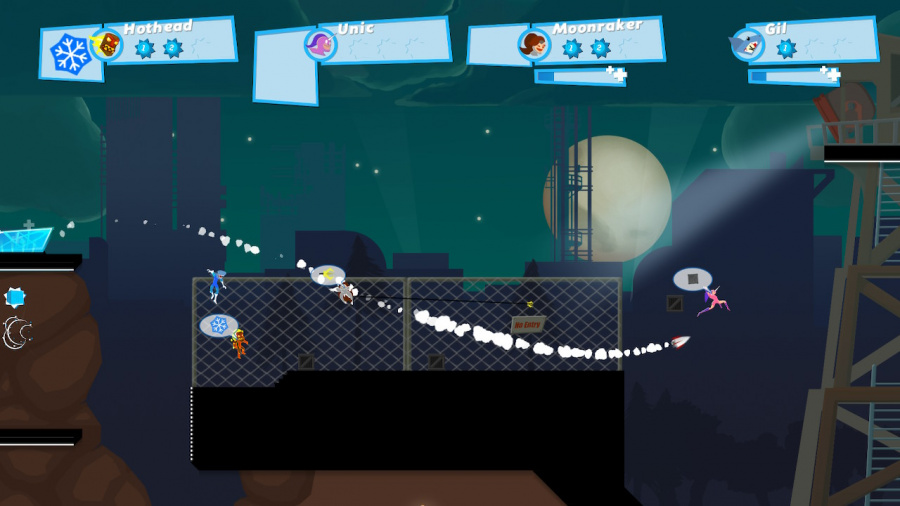 Each race is simple in its objective: reach the end of each of its dozen or so maps by any means necessary. Running too slow or getting caught up in various obstacles will risk you being eliminated from the race, so you’re constantly having to think two steps ahead. Environments are interactive as well, offering numerous ways to slow down your fellow racers or sling yourself a few steps ahead. There are often little shortcuts to utilise, offering the opportunity to regain the lead or lose it again in a matter of seconds.

Each of the five super-powered characters on offer possesses their own unique traits and powers, but most of the time you’ll be relying on your ability to jump, slide and grapple-hook your way around each course. You can slide to avoid low-hanging spikes or enter small openings, but you can also use that momentum to tackle another player and slow them down. You can briefly stick to walls, as well – as with most twitch platformers – so for anyone who’s played the likes of Guacamelee! or Super Meat Boy will feel right at home with the smoothness of SpeedRunners’ racing mechanics and controls. 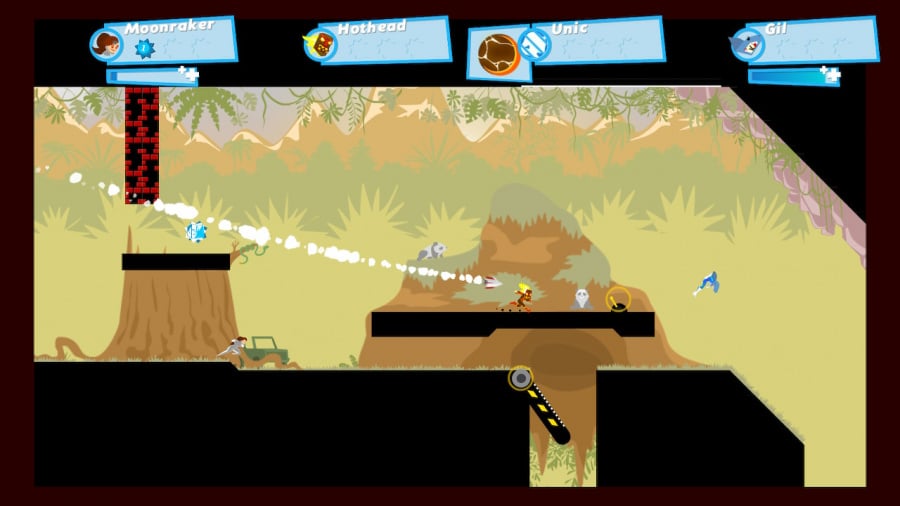 The game comes with a handy practice mode and tutorial (which really helps when you’re trying to get used to the game’s fast-paced rhythm), as well as a decent (if brief) story mode. You can compete in races solo if that’s your preference, with some pretty aggressive AI on offer (especially if you play on the Hard or Unfair difficulty settings), but SpeedRunners is at its absolute best when you’re playing against actual humans. There’s support for online matchmaking, so if Switch forms the same kind of dedicated player base as the PC version, you’ll have a steady stream of online rivals – but this is a multiplayer experience best experienced in couchplay. Flinging a missile at a friend as they’re about to reach the finish line, or pulling another back with your grappling hook as you zoom past them is ten times more fun when you’re sat next to the person you just sabotaged on-screen.

Regardless of how you play, SpeedRunners is all about how well you deal with pressure. You can fling weapons such as missiles and mines at your opponents as you progress through each course, and if that’s not enough to contend with, the amount of space you have to utilise on-screen changes the longer a race lasts. That’s right, in an almost Battle Royal-esque twist, the edges of the screen will glow red as the screen shrinks around you. Now there are fewer choices when it comes to your route, leading to a brilliant flavour of chaos as everyone desperately tries to juggle platforming with the need to win a race in a rapidly-encroaching course. 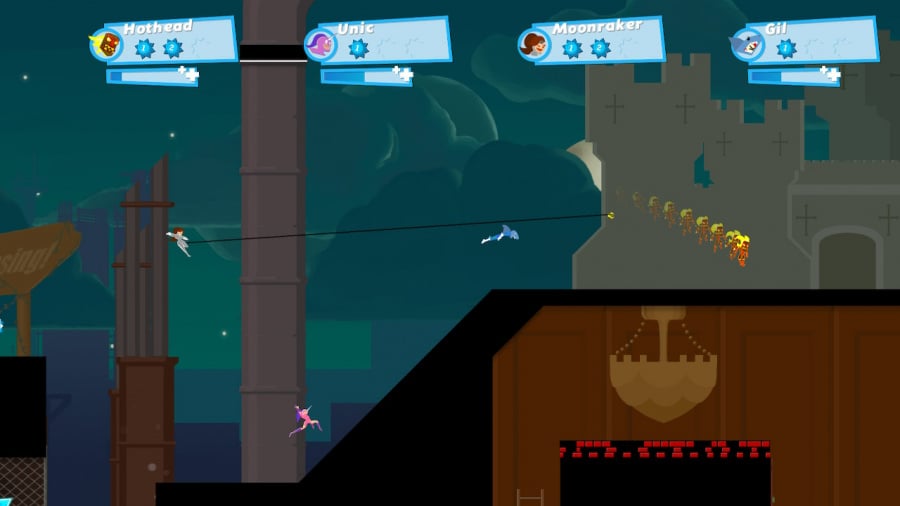 Having gone through various overhauls and updates over the years, the version that’s now picking up speed on Nintendo Switch is pretty slick when played in docked mode. With that larger amount of screen real estate, it’s far easier to track the small avatars on screen as they zip and flit through a course. However, we did find a few issues with performance when playing in handheld mode, mostly involving slowdown. It’s not a regular issue – we played quite a few races in handheld mode both offline and in story mode where very little to no slowdown – but some races become almost impossible to play. It’s an unpredictable issue, and one that makes playing in docked mode the safer bet for the time being.

If you’re after a new addition to your social multiplayer pile, this is an easy sell. Sure, it’s a little old considering its long history on myriad platforms, but it’s hard to deny just how enjoyable and easy it is to pick up, even for younger Nintendo Switch owners. The support for local and online multiplayer is great, as is the ability to play through the story mode solo, but the intermittent issues with performance in handheld mode does put a few wrinkles in this hero’s costume.