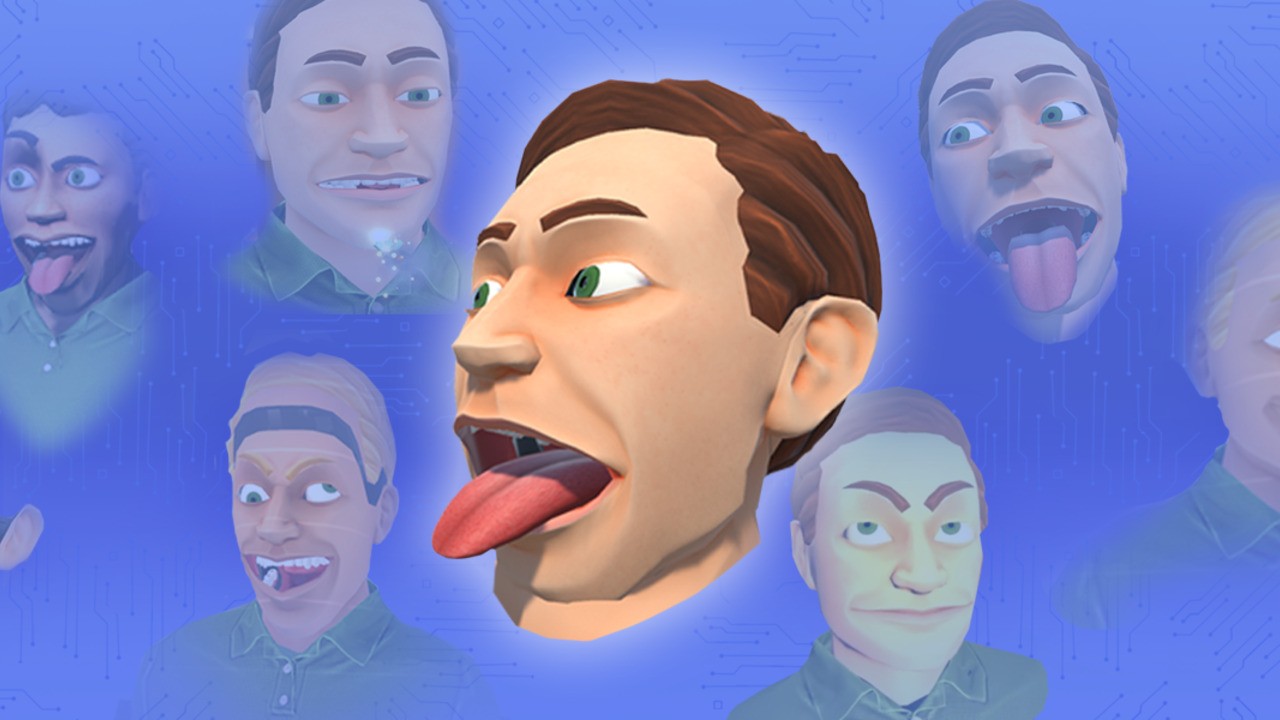 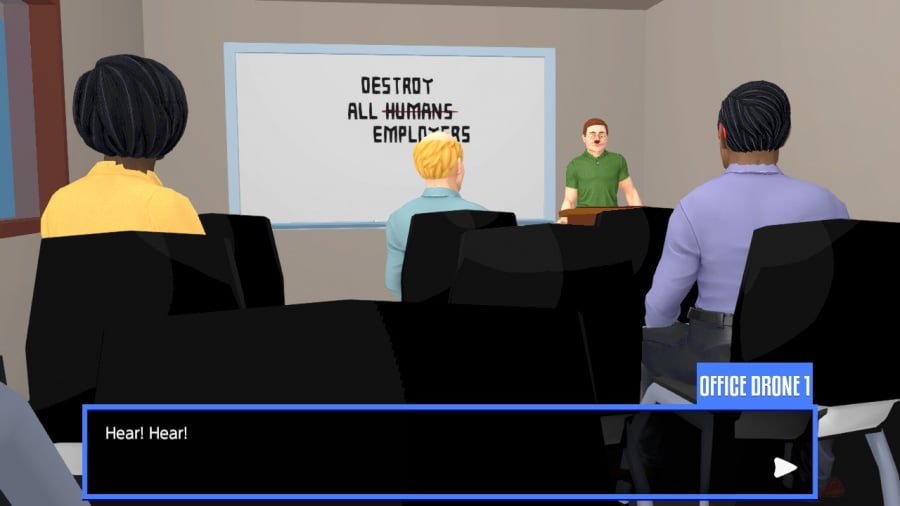 Speaking Simulator is a comedy indie game that takes the idea of social anxiety and ramps it right up to eleven. You assume the role of Blank Textsfield, a hapless android who’s been sent to earth to infiltrate human society, and in order to do so, he must engage in various social interactions while attempting to speak and act as though he’s definitely not a robot. It’s a brilliant idea and it’s backed up by some very funny writing that carries the whole thing along much further than it really has any right to. However, it’s let down in the end by an overall lack of polish and controls that need a bit of work in places.

Blank’s first mission wastes no time throwing him right in at the deep end of human socialising as he begins his infiltration of earth on an awkward first date. You take control of his mouth via the right thumbstick, moving it around in time to arrow prompts, while the left stick is used to flap his rather large tongue around inside his mouth in order to hit one of three green lights required to complete the words he’s currently trying to force out of his malfunctioning face. 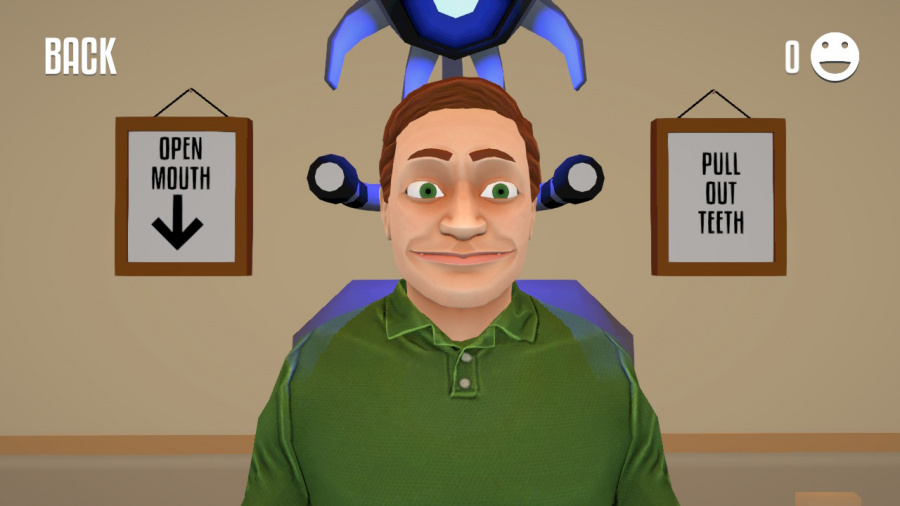 It’s pretty amusing stuff from the off, and the various facial meltdowns of our android pal as he struggles to converse – paired with the deadpan dialogue between himself and his human counterpart – definitely propel you onwards to see what happens in the next scenario. However, even in these very early stages, the game’s biggest problem makes itself apparent: the tongue controls are exasperating. We get that it’s meant to be a joke and the clumsiness and raggedy nature of things is all part of the deal, but this steers just a little too far towards the frustrating side of things, making it more of an annoying chore to play than it should be.

Things do pick up a few levels down the line when you unlock a few new tricks for Blank. Upgrading your “Lingual Hydraulics” loosens that big tongue up a bit and makes things slightly easier to deal with, while slotting some points into your “Expressive Facial Pistons” sees you obtain control over the movement of your eyebrows.

Adding eyebrow concerns to the base mouth and tongue controls – as well as the requirement to constantly change your expression between happy and sad via the Y and X buttons – ends up making things pleasingly hectic in later levels, and it’s here that the game is at its strongest. The tongue controls do continue to annoy, but you’ll be so concentrated on everything else the game is firing at you that you might not notice it quite so much as in those first few missions. 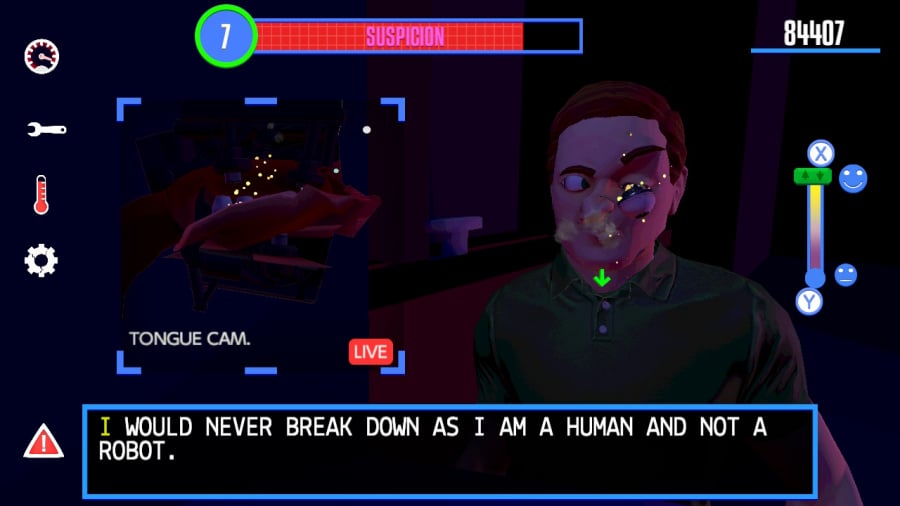 We should also give a shout-out to the missions themselves. From that first date to a very sweaty job interview, an awkward staff dressing down in a toilet, an unforgettable best man’s speech and an address to the entire nation, Blank certainly gets put through his paces and the whole thing maintains a good standard of humour right to the end.

There isn’t really any replayability with Speaking Simulator – it’s pretty much a ‘once and done’ deal – but we can see it being something that’s pretty fun to fire up at a party with a few friends at hand to take turns. It’s also a strangely lenient affair; we made an absolute carnage out of a few levels over the course of our playthrough but still managed to pass with flying colours. The combo meter is also a little hard to read, and again, we know it’s meant to be lighthearted stuff, but really, just a bit more polish with the controls combined with a more refined method of scoring and a clearer combo system, and this could have been a real indie gem.

Speaking Simulator is a great idea delivered in mostly the right way. It throws its android protagonist into some brilliantly awkward situations and, once you’ve unlocked his entire repertoire of facial movements, things get pleasingly hectic. However, a lack of polish with regards to the controls, zero replayability, a janky combo system and the fact you don’t actually seem to be able to fail a level all conspire to hold it back from being really easy to recommend.