Monster Hunter: World is one of the biggest games on PC right now, and it’s just got even bigger with the launch of its giant Iceborne expansion. So, if you’re been thinking about jumping into Capcom’s dinosaur-hunting / hat-making sim, but aren’t sure if your graphics card can run it properly, then have a read of my Monster Hunter: World PC performance guide below.

Here, you’ll find everything you need to know about how to get the best performance and the smoothest frame rates from almost all of today’s best graphics cards, as well as a couple of oldies I’ve still got knocking around in my cupboard. Together, we’ll see if they’re a mighty, frame-slaying Rathalos or a paralyzing little Paratoad. I’ve also included some tips on which settings you can turn off to help boost performance, as well as how many extra frames you can get by switching on Monster Hunter: World’s DLSS support with a compatible Nvidia RTX card.

Before we get started, though, let’s remind ourselves of Monster Hunter: World’s PC requirements. These are the same PC requirements for Iceborne, too, so you don’t need to worry about upgrading your PC when it comes to breaking in the expansion. As you can see from the minimum PC requirements below, you should be able to get Monster Hunter: World running on even quite elderly systems. The Nvidia GTX 760 came out in 2013, after all, so even those of your with PCs approaching their 5th of 6th birthday should be good to go here. However, those targeting at least 30fps at 1920×1080 on High will need a PC with Capcom’s recommended specs.

Again, this should be fairly doable in the vast majority of cases, especially when a 3GB GTX 1060 and 4GB RX 570 can be found for less than two hundred quid these days. In fact, I reckon Capcom are underselling themselves a bit here, as my own tests show that you can actually get a lot more than 30fps from these cards at 1920×1080. Indeed, to hit 60fps on High at 1080p, all you need is a 6GB GTX 1060, or an 8GB RX 580 – and that was without employing any of the performance boosting tricks I’ve outlined below, too.

To see how each graphics card fared, click the links below. As always, the main aim here is to find the best combination of settings to achieve a smooth 60fps at 1920×1080, 2560×1440 and 4K. Not all graphics cards will be able to hit 60fps at every resolution, of course, but for each card I’ve outlined the best case scenario for what kind of frame rate you can expect to see at a number of different graphics settings. As for my own PC, I tested each GPU with an Intel Core i5-8600K and 16GB of Corsair Vengeance RAM, plus all the latest graphics drivers and Windows 10 updates installed.

To use the game’s official parlance, Volume Rendering Quality “adjusts the rendering quality of volumetric fog”, which isn’t exactly helpful. What it’s actually referring to is the game’s lighting effects, covering everything from sunbeams cascading in through the cracks of its dense jungle canopies to the dust and smoke of its vast deserts and towering volcanoes.

Fog plays a big role in that, too, especially when you’re nosing around its dingy caves and underground monster warrens. But what this setting really boils down to is giving Monster Hunter: World’s lush environments a sense of realistic depth as you gaze out toward the horizon. When volume rendering is set as low as it can go (as you can see in the images below), everything looks a bit flat. 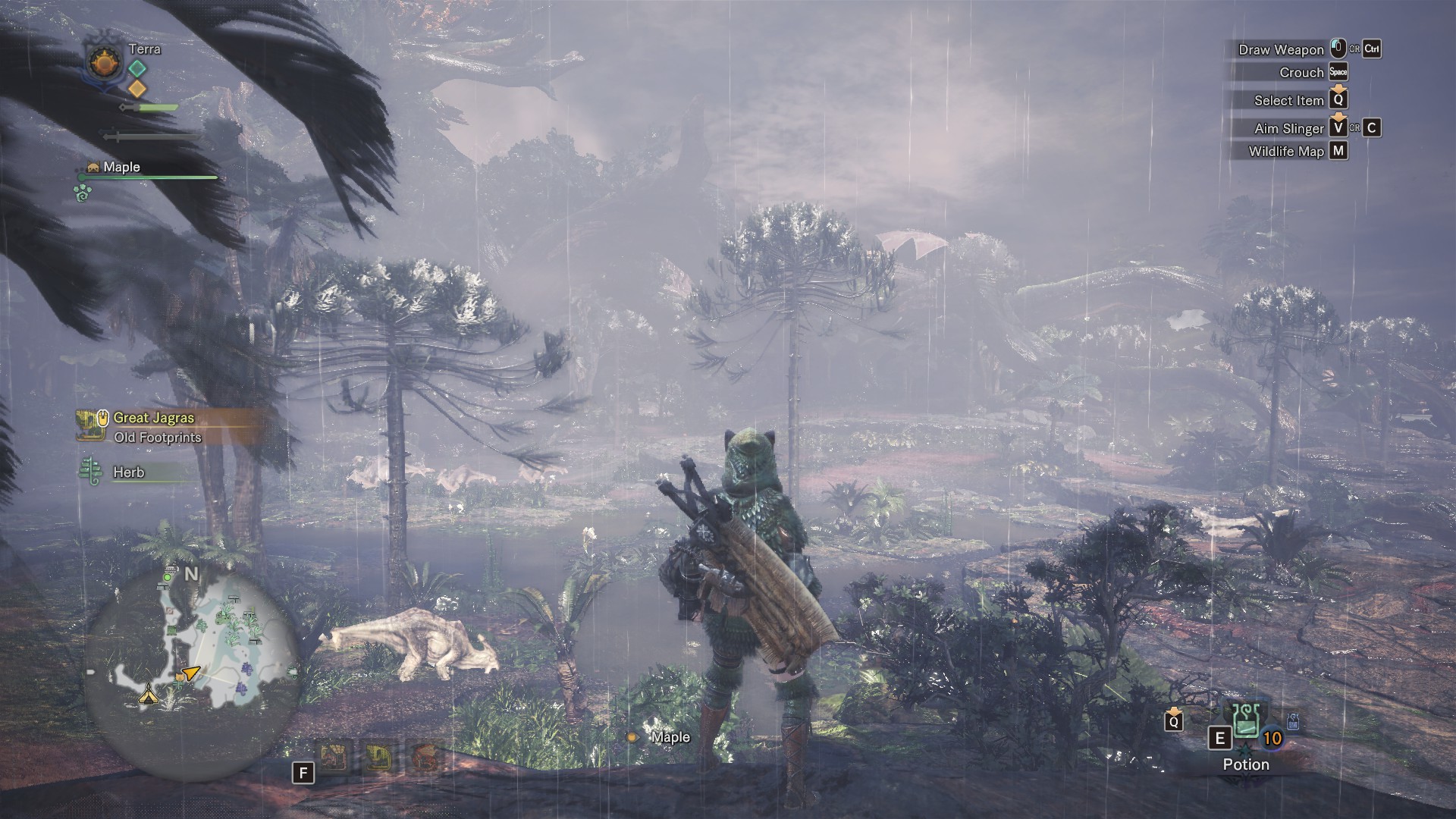 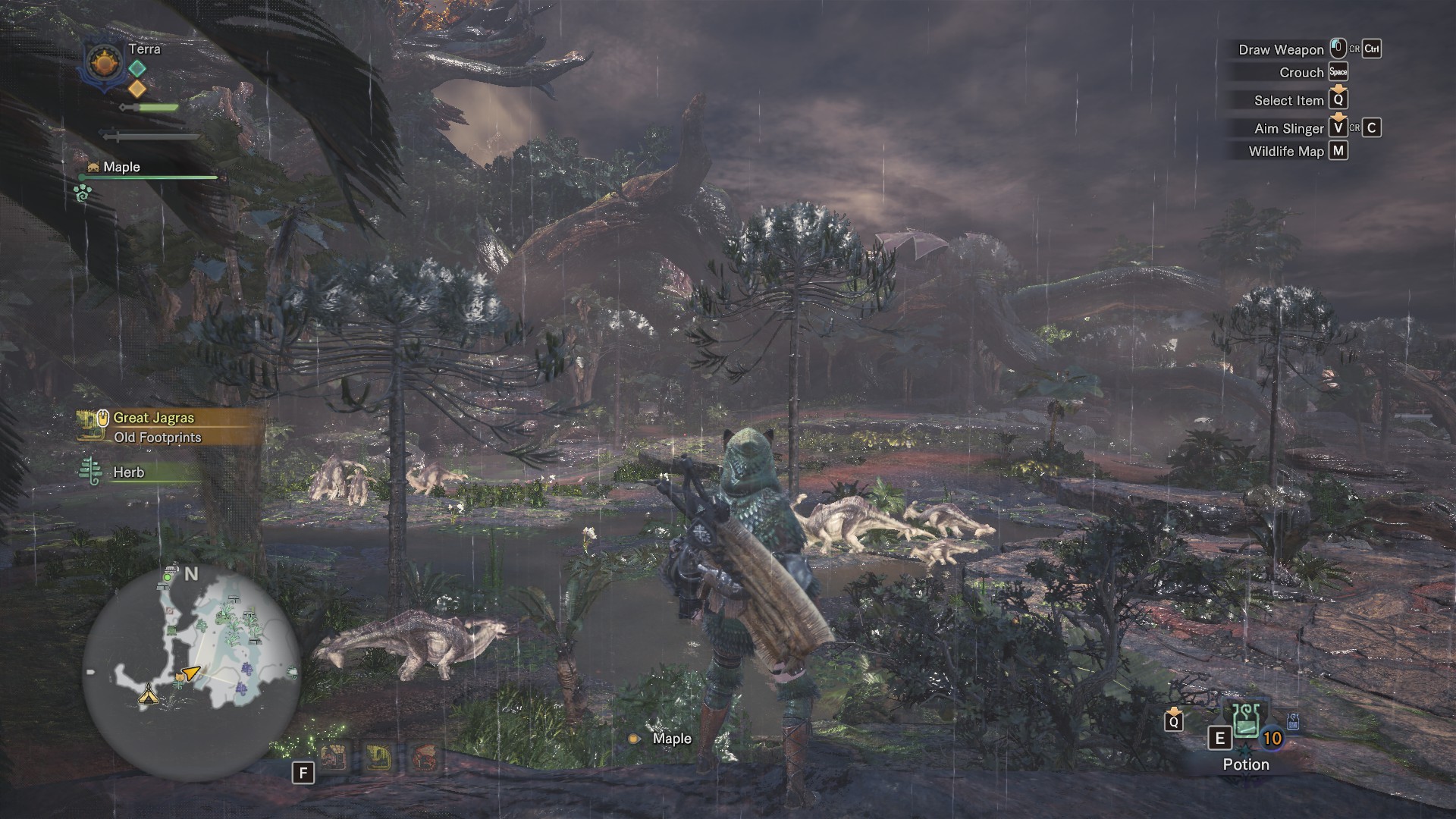 ….and MHW’s volumetric fog turned off seconds later in the same scene.

Still, by switching Volume Rendering Quality down from High to Off, I clawed back an average of 12fps, which is pretty good going for altering just a single setting. Otherwise, most settings make very little difference on their own, so much so that you might as well just drop down an entire quality setting if you find your PC’s struggling a bit.

With all that in mind, then, let’s sharpen our blades and go and make ourselves some new dinosaur pants. Just click on the numbers below or hop back up the page to the card of your choice. And don’t forget, if you want to find out more about how to make the most of your hunting experience, make sure to have a read of our guides team’s in-depth Monster Hunter World Iceborne guide.