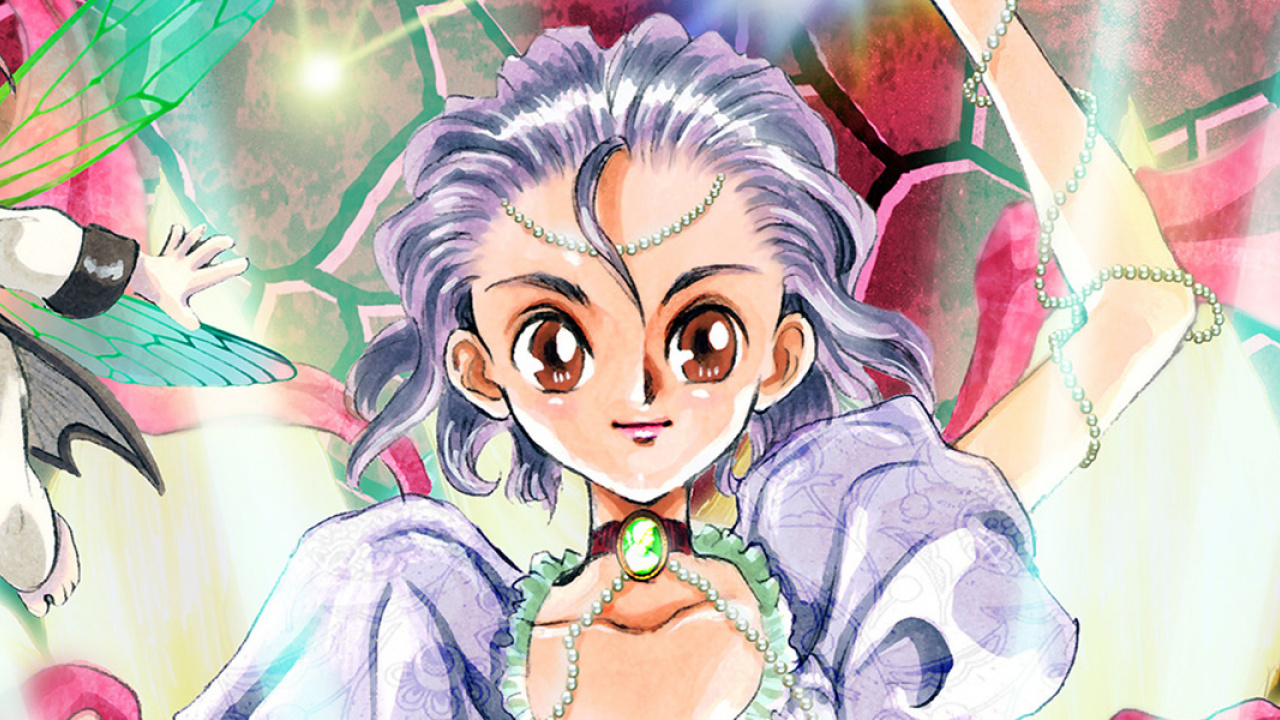 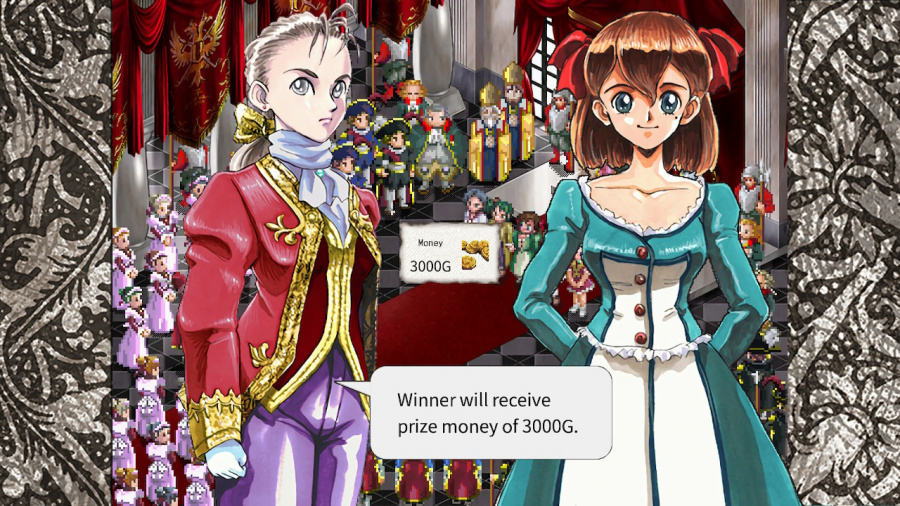 Princess Maker – Faery Tales Come True, otherwise known as Princess Maker 3, was first released all the way back in January 1997. A simulation/management game, it sees you take the role of parent to a ten-year-old fairy whose been transported into the body – and complicated social life – of a human. Over the course of eight years it’s up to you to plan every single aspect of this young lady’s diary, fifteen days at a time, choosing all of her leisure activities, schooling options and jobs in order to make her a success, with the ultimate aim of seeing her become the very best princess she can be at the age of eighteen.

There’s no doubt whatsoever that this is a niche game and one that’s showing its age despite the fact this is a somewhat refreshed HD version of the original. It also contains some views and attitudes as to what young women should be doing with their lives in order to make society a better place and succeed within themselves that are certainly… let’s say backwards. Amongst other things you’ll be informed that nutrition (read: dieting) is very important for a young lady and, tucked into the multitude of stats you’ll need to keep an eye on over the course of the game, you’ll find your splendid young daughter’s bust, waist and hip size have all been detailed. 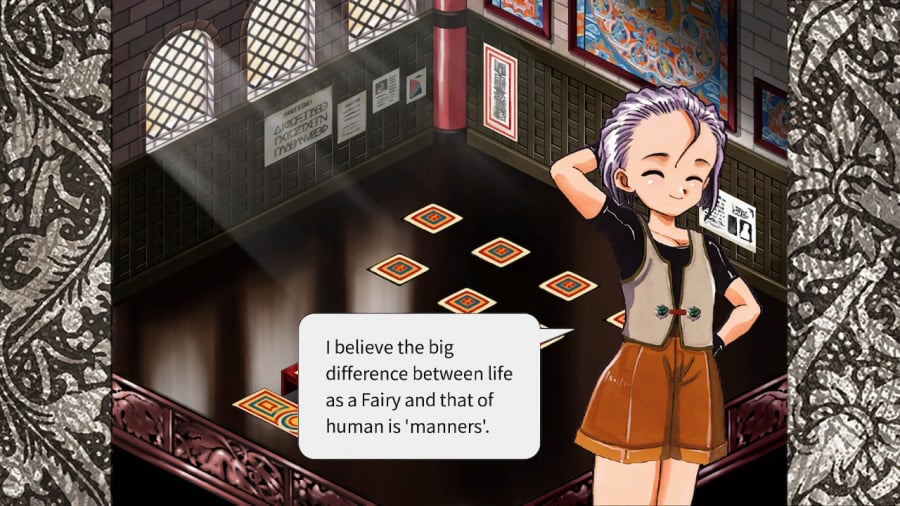 This backwards attitude, however, is not the game’s biggest problem. That comes in the form of a translation on the part of developer and publisher CFK that’s at best pretty poor and at worst almost unintelligible. For a game that’s so text-heavy it’s a huge oversight on the part of CFK to have almost every dialogue box strewn with the most basic translation errors, to the point most characters seem to be speaking in completely broken English. It doesn’t just make proceedings hard to follow, it ruins any real chance players have to engage in the development of the various characters they meet throughout their journey. Adding further to this is the fact the game offers nothing in the way of tutorials or explanations as to how to play. It’s not the most complicated of simulation games for sure, but if it’s your very first time playing a Princess Maker title you could find yourself initially confused by its quite archaic nature due to this double-whammy of zero help and terrible translation.

Once you do manage to get to grips with the various systems at work here you’ll find a little simulation game with a surprising amount of replayability – if it’s the kind of thing you’re into. Filling in your daughter’s diary in fifteen-day chunks you’ll need to finely balance a mix of study, work and rest in order to affect a sizeable number of stats in such a way that she becomes a success in life – and there really are quite a lot of statistics to keep in mind here.

Working will affect stamina and mood, especially if you have your little fairy princess doing tough manual labour for extra money so she can afford to go on vacation in her downtime. Elegance and intelligence are obviously important if you want her to become a really top-class princess, but those classes won’t pay for themselves, daddio, so there’s a balance to be struck. On top of all of this, her stress is constantly building as she learns and works until you factor some leisure time in. With somewhere in the region of sixty different endings and a single playthrough from the ages of ten to eighteen only taking a few hours, it’s certainly a game that’s built for constant experimentation, with an admirable number of different ways in which your princess can turn out. 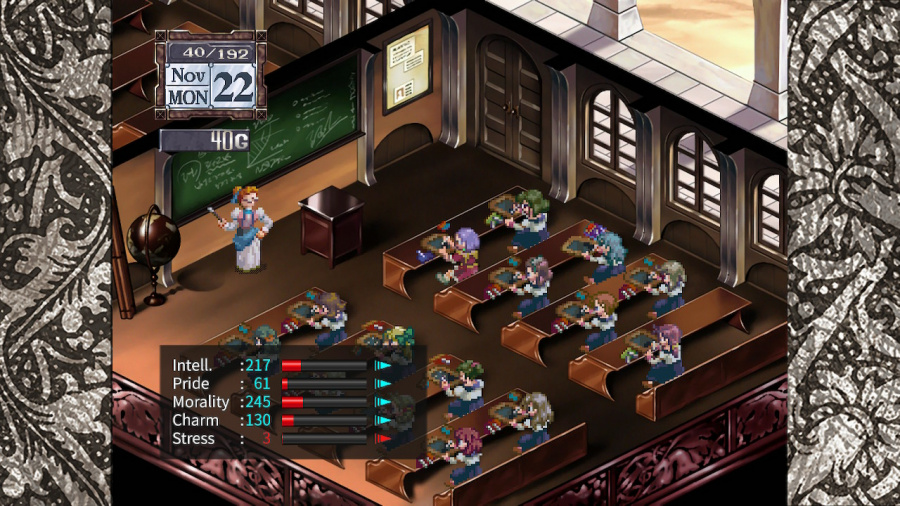 However, as reasonable as this all sounds, the fact of the matter is that the actual experience of playing Princess Maker – Faery Tales Come True is, for the most part, a pretty repetitive and laborious affair. Filling in your daughter’s diary and hitting ‘execute’ to watch your plans play out – complete with scenes of her attending classes or working one of her jobs – is truly mind-numbing stuff, which is helped in no way by the excruciating decision not to include any means of fast-forwarding proceedings. You therefore spend the vast majority of your time with this game watching stats rise and fall as interminable little scenes play out, waiting patiently for each fifteen-day period to stop so you can tally up your progress then start the whole process all over again.

In terms of this Switch version of the game, you’re getting the exact same updated version of the 1997 original as was released on PC in 2017, complete with a simplified UI, improved class and job animations and all of the terrible translation errors with which that one shipped. It really is a shame that CFK couldn’t see its way to devoting some time since the Steam release of this game two full years ago to doing so much as a scratch of work to their botched translation effort because, as it stands, this feels like a very lazy effort that does nothing to welcome new players or justify that noticeably higher Switch price tag.

If you’re a fan of the Princess Maker series you’ll already know whether or not Princess Maker – Faery Tales Come True is your bag. You’ll probably be able to overlook the complete lack of tutorials, abysmal translation job, sometimes backwards attitudes towards women and repetitive nature and get down to enjoying a strange little sim/management game that’s unquestionably suited to the portable nature of the Nintendo Switch. However, newcomers should beware that this really is a careless and sloppy port of a very old game that doesn’t show any real effort on the part of its developers to reward you for parting with your cash.