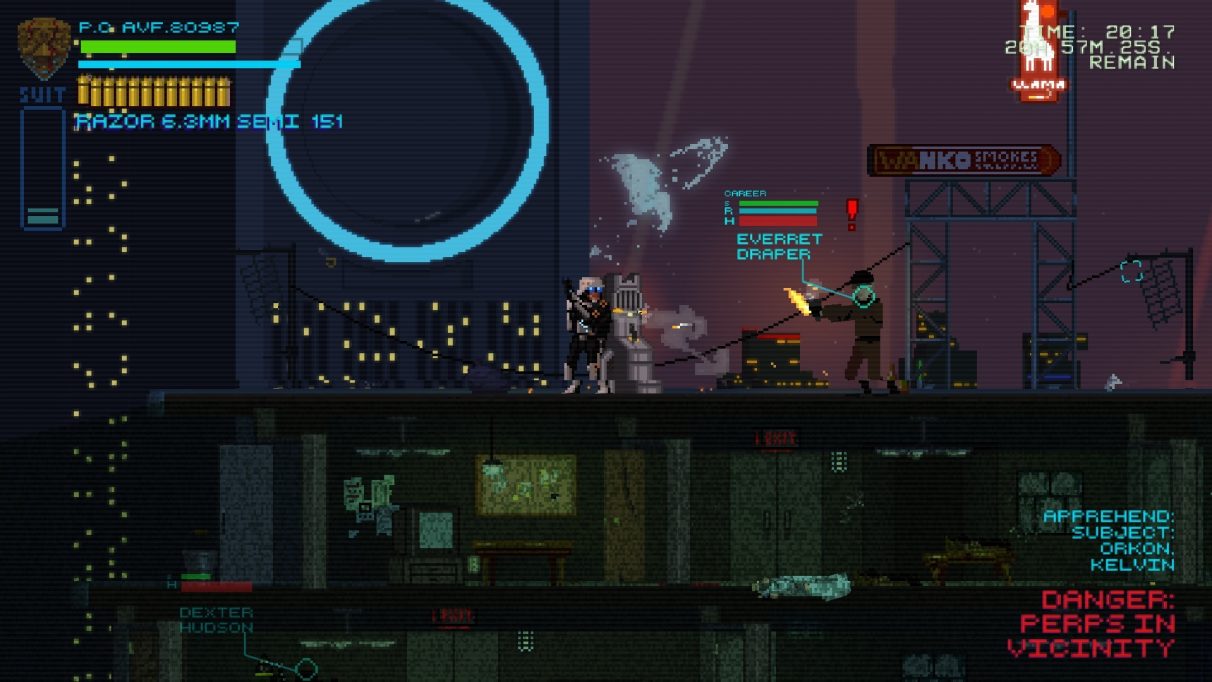 It’s been several years since I first played MiniLAW: Ministry of Law, the side scrolling shooter/fighter/screamer based on being a hybrid of Robocop and Judge Dredd. In that time it’s come a long way, adding more structure, story and flavour to its already colourful crime-stomping action.

The full release landed yesterday, and I have Some Thoughts.

I’ll be honest. I’ve kept a one of my many spare eyes on MiniLAW in the hope that it would overcome its horrible controls. Having gone back to it today, I can say that it sort of has. The controls are a lot better than they were, especially using a controller. But they’re still awkward, and the keyboard-and-mouse controls border on maddening. Worst of all, you can’t reconfigure them. Space to aim? SPACE? Shift is ‘use’, but F is dash, and you can’t run unless you dash first. Melee attacks are right click but blocking with your arms is stuck to the E button. Ludicrous.

It’s a shame, because other than that, MiniLAW is bloody great. You’re a future cyber-cop, sent out in a flying patrol car to subdue a variety of criminal groups who are running wild during a mass panic about a mysterious figure who’s hidden a nuclear bomb somewhere in the city. Scores, probably a few hundred blocks flare up into violence as you travel the city map, so you have to visit them and put down the troublemakers, either lethally, non-lethally, or verbally.

The best approach is usually to mix all three, since although you get more points with which to buy upgrades, weapons, and augmentations by playing non-lethally, many of the suspects are very hard to persuade, and picking them off with a gun is the only sensible option. That gets tricky when you’re ordered to bring in specific targets alive, but that’s the job. You get multiple ‘lives’ too, resurrecting on the spot with zappy defibrillator effects.

If you have a controller, I’d say it’s well worth playing. Its variety in weapons, playstyles, and stat-altering character backgrounds make for a lot of replay value, and the shooting and high-stakes decision making carry it a long way.