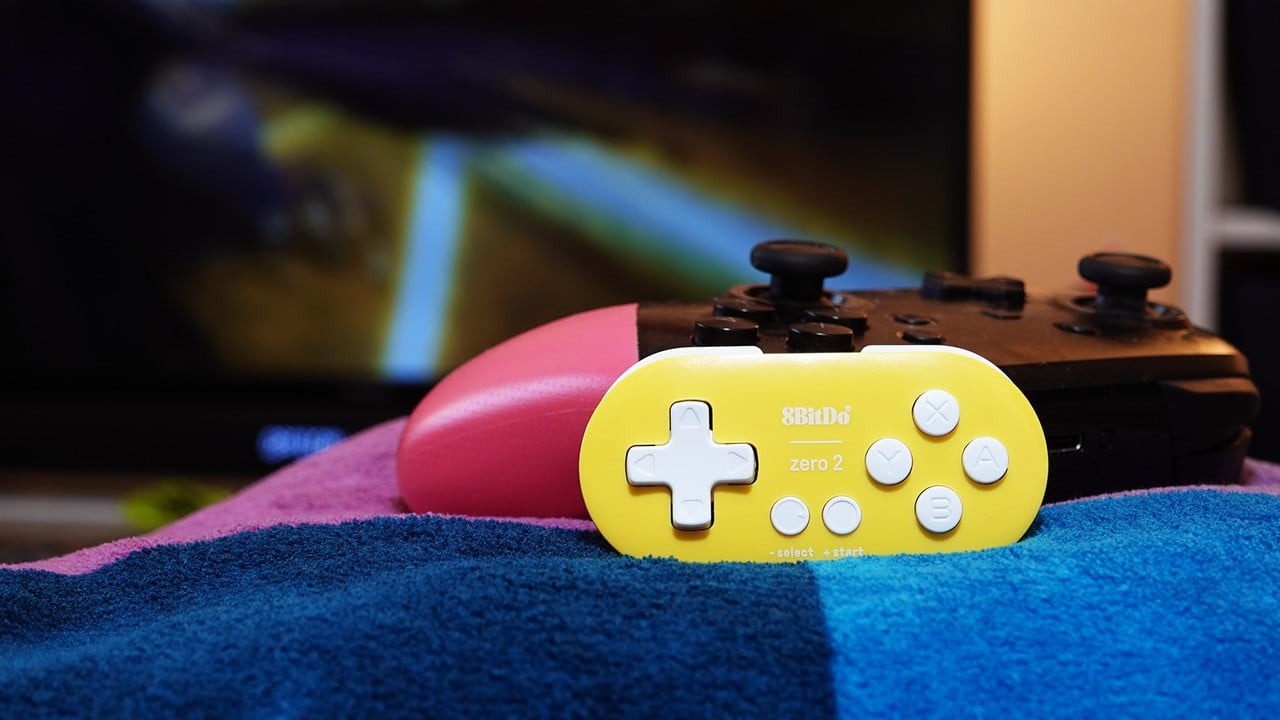 What’s more fun than playing some of your favourite games on the Switch? If your answer is something along the lines of ‘struggling to hold the controller’, then you’re in luck, as 8BitDo has finally come around to producing a follow up to their dinky Zero controller in the form of the imaginatively-titled Zero 2. Unlike the first in the line, this one is compatible with the Nintendo Switch, as well as the usual contenders of Mac, Windows, Android, and Linux. Can this micro controller earn a deserved place in your big drawer full of pads?

Well, let’s get one thing out of the way first; this thing is almost offensively small. It’s not only smaller than a single Joy-Con on its side, but it’s also considerably lighter, weighing just 20g. You may look at the images in this review and think it’s ‘very small’, but suffice to say, before we got our hands on it we were far from prepared for just how small it really is, and unsurprisingly, this means using it can be a bit of an issue – but we’ll explain why later on.

The SNES-like range of buttons are all present and accounted for; a D-pad, A B X and Y face buttons, Start and Select (or + and -), and two shoulder buttons in the form of L and R. For most 2D sidescrollers this is all you really need, and whilst the omission of a Home Button among other useful buttons is disappointing, there are some clever baked-in workarounds.

By pressing down on the D-Pad and Select simultaneously, you’ll be taken back to the Home Menu. Moreover, if you’re playing SNES or NES games, you’ll be lamenting the lack of a ZL and ZR button, as by pressing both of these a menu is brought up that is pretty much essential to the experience. Well, they’ve thought of that as well, and you can produce this input by simply pressing Start and Select at the same time. These are really lovely little inclusions that help provide more functionality to what is otherwise a fairly simple controller, but without cluttering what little space is remaining. Top marks.

So how does it actually feel to use? It should come as no surprise that the size of the controller is a bit of a hurdle, to say the least; we found several instances where we couldn’t maintain our grip on it properly despite our best efforts, and whilst that is in part due to the massive meat gauntlets some of us were born with, we’re not sure there are many people (beyond the very young) who will actually find this a comfortable controller to use for any length of time.

Size aside, the Zero 2 is actually very functional; the buttons all feel very strong and responsive, the D-pad is tip-top, and the build quality feels very good for something so small. The only slight downer is the L and R buttons, which are both a bit too resistive for our liking, meaning you have to press a lot more firmly than we’d expect to get a response out of them. There is a certain degree of fun to be had from the sheer ludicrousness of using the Zero 2; we can’t say for certain whether this can be a long-term novelty or not, but we suspect it could be a fun thing to whip out on roof parties.

And that’s not even beginning to mention the portability aspect of this controller. We can’t think of many applications where having a pad this small and portable would be all that more practical to carry around than the two Joy-Con that are already attached to your console, but if you think there’s merit in it then we’re not going to argue with you; perhaps four-player local gaming sessions with two Joy-Con and two Zero 2 pads are what you’re looking for?

As a final little bonus, we should also mention that despite being a purely digital input, the D-pad does not, in fact, behave like one – rather, it emulates the left analogue stick. This may seem trivial at first but this opens up the library of compatible games enormously, even going so far as to make Super Smash Bros. Ultimate surprisingly playable (with the right control settings).

In short, the 8BitDo Zero 2 is a novelty, but it’s a fun one. Considering how silly the whole concept is, the device is actually very robust and well-manufactured. With the right care, we can easily see this thing lasting for years and years. It wears its impracticality on its sleeves – and that at least is very laudable – but whether or not it makes sense to fork out the money for one is a decision you’ll have to make for yourself.

Please note that some links on this page are affiliate links, which means if you click them and make a purchase we may receive a small percentage of the sale which helps support the site. Please read our FTC Disclosure for more information.