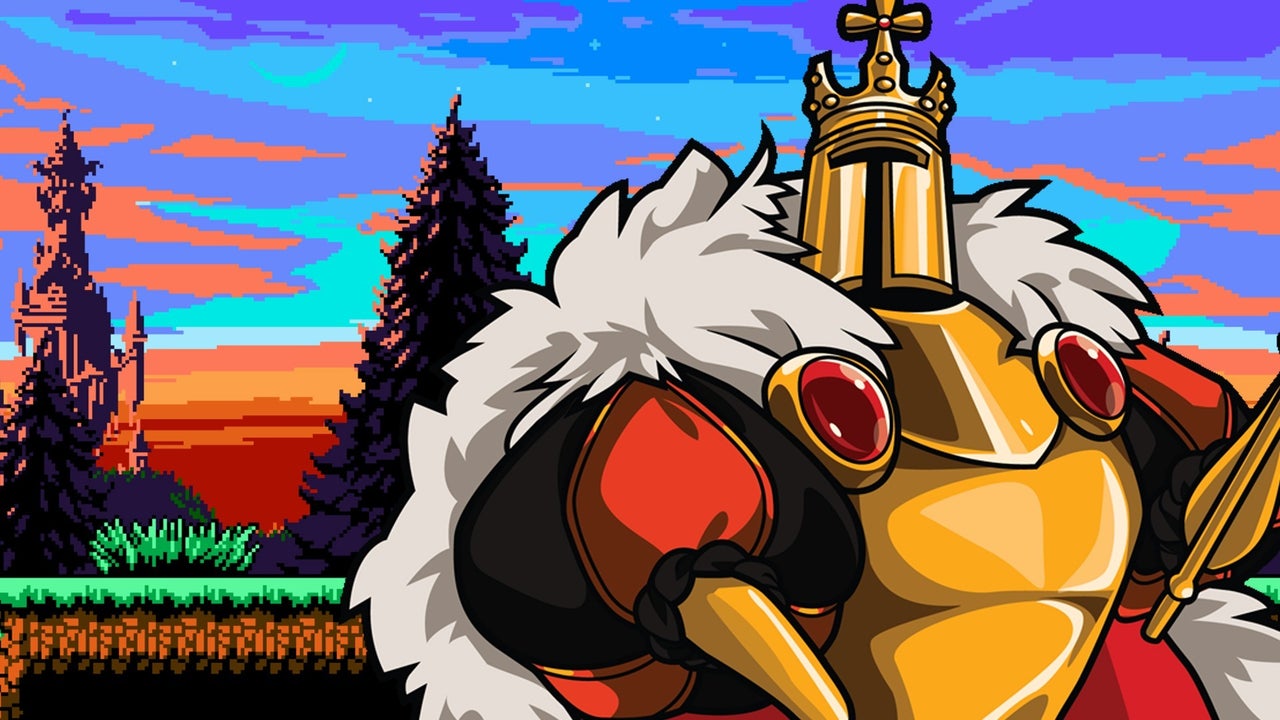 With three excellent Shovel Knight games down already, it’s no surprise that the latest, Shovel Knight: King of Cards, is another great 2D platforming adventure with excellent level design, charming characters, and fun new mechanics. What is a bit of a surprise, however, is how King of Cards grafts a well designed but tonally inconsistent collectible card game onto the usual Shovel Knight platforming package, and how that card game is integral to both the story and progression of your new protagonist. As a result, King of Cards is a bit at odds with itself. While this is the largest Shovel Knight game yet (clocking in at about 11 hours for me), with a great refocusing on a higher quantity of shorter levels with alternate pathways, its card game’s intrusion can make it feel like a delicious meal with a strange, unfamiliar sauce poured all over it that I would have rather ordered on the side.

King of Cards’ story is fittingly quite silly, but it still serves as a fun prequel chapter that fills in some remaining gaps in Shovel Knight’s interconnected plot that ties together each of the four games. You play as King Knight, a Knight that dresses, acts, and behaves like a king despite not actually being one. The Jerry Lawler of Shovel Knight bosses, so to speak. He so desperately wants to be a king that when he learns of a grand tournament for the card game Joustus that will crown its winner the “King of Cards,” he immediately runs home to his mother, tells her that he’s forgoing his chores and leaving on a great quest to become a king, eats a pie, and then sets out to defeat the three Joustus Judges standing in his way.

Shovel Knight – All 8 Bosses – The Order of No Quarter

As always, Yacht Club Games delivers a surprising amount of heart with its storytelling. While King Knight isn’t quite as likable as the noble Shovel Knight, the hopelessly lovestruck Plague Knight, or the dark and mysterious Specter Knight, the arc of his character is still pretty clever – despite anyone who has played the original game knowing where it will eventually end up anyway.

King Knight’s twist on Shovel Knight’s retro platforming revolves around the one-two punch of a Wario-esque shoulder tackle, and the resulting graceful aerial twirl that allows him to bounce off of enemies, blocks, and other objects, much like Shovel Knight’s own shovel bounce. It’s not quite as thrilling as Specter Knight’s fast paced aerial slashing style, or as creative as Plague Knight’s bomb jump-centric gameplay, but it still offers a fun new way to overcome familiar obstacles.

The magic that makes it work is how you are cleverly restricted. Without an enemy, object, or particular type of wall to shoulder tackle, King Knight cannot bounce back and start to spin – and after that initial hit, he must use his spin to bounce again before he’s able to string it into another dash midair. It’s a great ruleset for an otherwise fairly simple idea that forces you to think on the fly about what order you need to kill enemies or break blocks to get through any given platforming challenge.

This is all communicated wonderfully through the level design, which finds a nice sweet spot of being challenging without ever being frustrating. King of Cards is a little easier than prior Shovel Knight games thanks to how generous it is with dropping health restoring hearts, but there are still a ton of bottomless pits, insta kill spikes, and devious enemy placements that presented a good challenge for me even as an experienced Shovel Knight vet.

In true Shovel Knight fashion, King Knight also gets a bevy of heirlooms that essentially act as special magic attacks, offering a little extra flexibility in how you’re able to conquer the many hazards it throws at you. There’s a great selection here – one highlight being a flipping sword attack that doubles as a damaging attack, and a way to get extra height on your jump – and even though a lot of them are very situational, like a dash attack that lets you speed across water, they reward you for thinking about how you can best use your tools to make a tough situation much easier.

These heirlooms are usually bought with Merit Medals, a currency that can either be found hidden in each level, or commonly won through a game of Joustus, which brings me to my biggest, and really only problem with King of Cards: the cards.

Joustus is a grid-based card game that resembles something much closer to Final Fantasy 8’s Triple Triad than the likes of Hearthstone or even The Witcher 3’s Gwent. You and your AI opponent take turns placing cards down on the playing field, using them to push other cards around as you try to claim specific gem spaces. Each card has arrows pointing toward one or more of its edges indicating which directions you can use them to push another card, but those arrows also block cards from being pushed back the same way. You go back and forth pushing cards and setting up others to block pushes until all of the spaces on the field are filled, at which point whoever holds the most gem spaces wins.

There’s actually a ton of depth in this simple and easy to understand premise, and Joustus evolves nicely with increasingly powerful cards that introduce new concepts, such as a double arrow that can push through standard arrows, but is stopped by other double arrows; a bomb arrow that can blow up whatever card it gets pushed into; and an arrow that actually flips control of any card it pushes, making an opponent’s card yours or vice versa.

As well designed as it is though, Joustus just simply isn’t as fun King of Cards’ platforming, and any Joustus-themed levels that popped up on the overworld essentially served as speed bumps, stuttering my enjoyment of the main game. The tutorial for Joustus also doesn’t go over anything more than the basics, leaving you to figure out the deeper strategy and tactics for yourself. That can be extremely frustrating because everytime you lose a game of Joustus, you automatically lose one of the cards in your deck. You can mercifully buy cards that you lose back, but that costs money that you could be using to improve King Knight with health buffs or new types of armor like in previous Shovel Knight games.

This minigame is thankfully entirely optional once you get past the first mandatory Joustus House, but since playing it always offers Merit Medals, you’ll be missing out on a large chunk of the otherwise limited currency needed to buy King Knight’s exciting heirlooms and other upgrades. It’s essentially like if you wcould reach a level cap in The Witcher 3, and the only way to improve Geralt further was by winning Gwent matches. : Gwent is fun, but not when if you’re forced to play it to kill monsters better.

Joustus undoubtedly weighs down the campaign in King of Cards, but the overall package is also lifted up by some smart changes to the Shovel Knight formula that help balance that out. There’s a lot more levels this time around, and while they are shorter, they are also much tighter in their design, allowing for some really cleverly themed levels that never outstay their welcome – , like one level that requires you to shoulder charge test tubes in order to shoot out their corks, which can then be used as platforms for a short time. Many of these stages also have secret exits that encourage both exploration and replayability.

And, of course, the music is just as incredible as ever. While most of the music is carried over from previous games, there are a couple of new tracks, like the one that plays over the new Troupple Pond level, that are up there among the best in the series. Composer Jake Kaufman is a musical wizard.