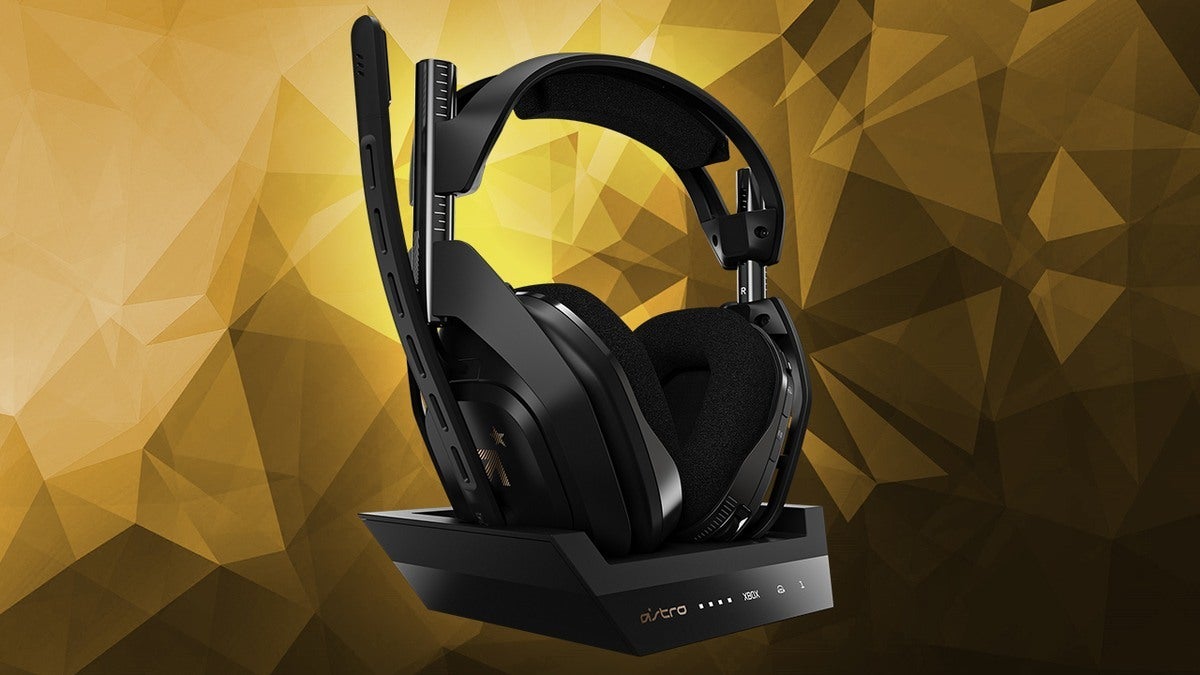 It was 2012, and the original Avengers was just hitting theaters. “Call Me Maybe” was tearing up the charts. And Astro had just released its first wireless headset, the original Astro A50 Wireless.

For seven years, the A50 has occupied top billing as Astro’s flagship headset. While technology (and Marvel movies) keeps evolving over the years, the A50s have largely remained the same. The sound quality is phenomenal, the build quality is above average, the software kind of sucks, and the price tag is still a bit shocking.

That’s not to say nothing has changed. This time around, the latest version of the Astro A50 Wireless sports a new base station, a 2.4GHz connection, and improved drivers. But is that enough to justify its $239 price, a year before next-gen consoles?

Astro A50 + Base Station – Design and Features

The A50s come in two similar colorways – a sleek black and gray for PS4 (See it on Amazon) and black and gold for Xbox One (See it on Amazon). The only noticeable difference between the two is small branding on the headset and base station. It’s far more subtle than previous versions, which sported neon piping. There’s no denying these are still clunky gamer headphones, but if you squint just right, they start to look like something you might find on an audio engineer’s desk.

The headset is made of heavy plastic. I firmly believe a headset that costs $230 should feel elegant. I once owned a $300 headset that was made of metal and Italian sheep leather. It felt like a steering wheel in a luxury car. In contrast, the A50s feel like, well, plastic. But despite the plastic frames, the A50s are manufactured exceptionally well. You can spin and contour the ear cups with a satisfying twist, or flip the attached mic up to mute it, which locks with a satisfying snap. The microphone is bendable, although it never stays in place after shaped.

In short, it’s almost exactly like the A50s that came before it. But there are some cosmetic differences.

The oblong base station has been shortened, and now occupies a much smaller footprint than its predecessor, which is a welcome addition for small gaming desks and TV consoles. You might not be able to tell – I initially couldn’t – but the headset is smaller too. The A50’s button layout has been streamlined. There’s a slider for power, a button for Dolby Atmos, and another to cycle through EQ modes. The A50s also relegate a hefty amount of info to a small LED on the base station.

It’s surprising that Astro has locked so much information on a small LED strip when it’s built its tournament-friendly wired solution, the Astro A40 TR and Mixamp, specifically to help gamers navigate dials without ever needing to glance away from the game.

Unfortunately, Astro hasn’t redesigned the most confusing part of the A50s: the built-in MixAmp. If you’ve never used a pair of A50s, the MixAmp works like this: By holding the backside of the right earcup, you can adjust your mix to have more of your voice in it. By pressing the front side of the right ear cup, you can adjust the mix to have more of the game in it. Got all that? Okay, which way do you press if your voice is too loud?

I’ve believed this is terrible design since day one, and I still find it just as frustratingly inscrutable. To quote, well, me, it feels backward. “I couldn’t get over the idea that voice should be in front – where the microphone is – and game volume should be in the back – where the headphones are.”

No number of mnemonic devices or forced repetition will ever make this make sense to me. It’s the PS4 power button all over again. I’m doomed to eject when I mean to power down. A 90-degree rotation would fix the problem: up for ear, down for voice.

Astro A50 + Base Station – Software

If you’re not getting the exact sound you want, you can download the free Command Center software and tweak just about everything.

The software experience has never been great, and very little has changed. The app is still not updated for retina displays, it still requires you to completely re-download the software with every update, and it’s still prone to any number of awkward setup hiccups.

I ran into every issue setting up my A50s for the first time. After downloading the most recent software, I was unable to hear the A50s connected to my computer. After a series of helpless actions like unplugging the base station, lifting the headset, and setting it back in the cradle, the Command Center finally registered that there was, in fact, an additional firmware update for my A50s.

The software experience has never been great, and very little has changed.

The actual software capabilities are still impressive. Want a bit more emphasis on the low-range? Just adjust a slider. Want to hear more of yourself when you speak into the microphone? A quick adjustment to the noise gate should suffice. You can quickly create your own EQ mode, save it, then sync it to the headset. There’s even a setting for Streaming, which lets you adjust game, chat, microphone, and auxiliary audio (like music).

The software is undoubtedly powerful, but it can get confusing in a hurry. I’ve used the software dozens of times, but each time I have to relearn what each slider does. There’s also an advanced settings section guarded by a dialogue box that boils down to “don’t mess with this.” It remains the domain of audiophiles.

Astro A50 + Base Station – Performance

Even shoddy software can’t hide the fact that the Astro A50s are a stellar gaming headset. This year, Astro has moved to 2.4Ghz radios (as opposed to 5.8). In theory, this should be a downgrade – 5.8GHz provides better speed and less interference. In practice, 2.4Ghz is a far more reliable connection with the added benefit of using less battery. That’s allowed Astro to slim down the headset’s batteries, in turn reducing the weight of the already comfortable headset.

Throughout testing, the headset never once disconnected, and despite a multitude of other 2.4GHz connections in my house, they never suffered from any interference either.

In practice, 2.4Ghz is a far more reliable connection with the added benefit of using less battery.

Battery life is, as always, stellar. This year, the A50s are rated for more than 15 hours of playtime – and it was a challenge to run down the battery. That’s good because they take an eternity to charge. Thankfully, the Base Station seems to have a more powerful magnetic connection, which helps slot the headphones in on the first try more frequently.

The new buttons feel like one step forward and two steps back. While I like the big, unmistakable feel of a three-button layout, the hierarchy is weird. The top button is on a slider, the Dolby Atmos button doesn’t do anything on the PS4 model, and the EQ button must be hit multiple times to cycle through the settings – and then confirmed by glancing at the Base Station. It feels far less competitive than a manual dial, like the one on the A40’s newest MixAmp.

The new drivers, on the other hand, are just a step forward. They sound crisp and clear whether you’re playing a game or listening to music. They may only be a marginal improvement over the already exceptional ones before it, but better is better. Dolby Atmos support is the real deal, too. By using the game’s metadata, it can place audio in a 360-degree radius. The result is an exceptionally immersive audio experience. You can pretty easily make out where enemies in Overwatch are running from. For Xbox One fans, the problem is the same as it’s always been: your game has to support it. On PlayStation, Dolby Atmos is only supported on PS4 Pro. In many ways, connected to a gaming PC remains to be the best use-case – the smaller cradle fits nicely on a desk, and the LEDs are perfectly visible.

If you haven’t activated your Dolby audio, you may find that toggling the button can mess with your computer’s audio. After accidentally activating it, I was surprised to find it muddling mid-tones and highs, while somehow simultaneously underemphasizing bass. That’s in stark contrast to when it’s purposefully activated. While I still believe the Dolby Atmos support is not a reason to buy a headset, it’s also a welcome addition to the games that support it. Spatial sound is often billed as “a new dimension” to gaming, and while I don’t believe that’s true, I do believe knowing exactly where your enemy is in an FPS gives you a competitive advantage. Especially in a game like Call of Duty: Modern Warfare, where the enemies stomp around corners – being able to tell which corners is beyond helpful. But more importantly, it makes the games feel more immersive.

Battery life is, as always, stellar.

The EQs are, as always, varied in quality. Astro’s default EQ (#1) still sounds the best. Pro boosts highs so you can hear footsteps more clearly. Media offers a more balanced profile but feels a bit flat. Even at low volumes, the difference in these EQs are substantial. Which is lucky, because while the A50s’ over-ear cups block out plenty of noise, but they could stand to get a lot louder. How am I supposed to feel like I’m in the middle of a war zone in space when I can hear the cars honking outside? This is an issue I have not experienced with any other Astros.

The Astro A50 Wireless launched with an initial launch price of $300, but it’s since seen its price lowered to $239.