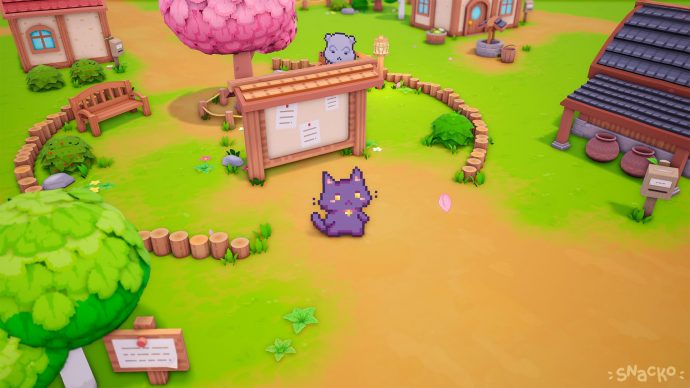 Howdy, RPS readers! I’m definitely not Jay, but I come with her blessing to deliver another Sunday edition of Screenshot Saturday Sunday, a showcase of developer works-in-progress under Twitter’s #screenshotsaturday. This week: feline farm simulation, bouncy trucks, and two moody survival games with a little more in common than would seem at first blush.

I still can’t shake the residual Halloween energy, which is probably why this shot from Tower Of Leaves clutched the front of my shirt and demanded attention.

It certainly looks like David Szymanski brought over a cartload of experience from his work on Dusk. I’m a sucker for pointillism art and spooky, low-poly aesthetic, so the fact that we’re closing in on American Thanksgiving can eat dirt. Spooky Season all year! Check out the Steam page for more eerie images.

Let’s swing whip-neck fashion in tone to Snacko, a “farming cat-venture game” from the wife and husband dev team at Bluecurse Studio.

Just… lookit. A wee cat (based off their furry friend Momo), admiring the fruits of their labor under a steady rain. The only way this game could tic more of my boxes is if it also included home customi – what’s that? It does?! Go bug-eyed with excitement like I did by scoping their website.

Alright, listen. I didn’t mean to double dip into the Dusk devpool when curating today’s selection. Maybe they’re just talented folk, and maybe a game where you can steal unconscionable amounts of cheese appeals to me.

Victorian skulk-to-survive Gloomwood has been in development for at least five years, by our reported reckoning. And as long as I’m able to pilfer Parmesan, grab Gruyere, and bilk Brie throughout, I’m keeping an eye on it, and you can as well on the official page.

It’s been a rough week for trucks and truck lovers. So, I thought a small bit of redemption from developer Alberto Mastretta might be salve in any sharp, polygonal wounds.

You might remember Circuit Superstars as that decidedly non-Square Enix game announced during their E3 2019 presentation. No shade, but I reckon the vehicles in this game could take a baseball or two better than some other unnamed vehicle prototypes.