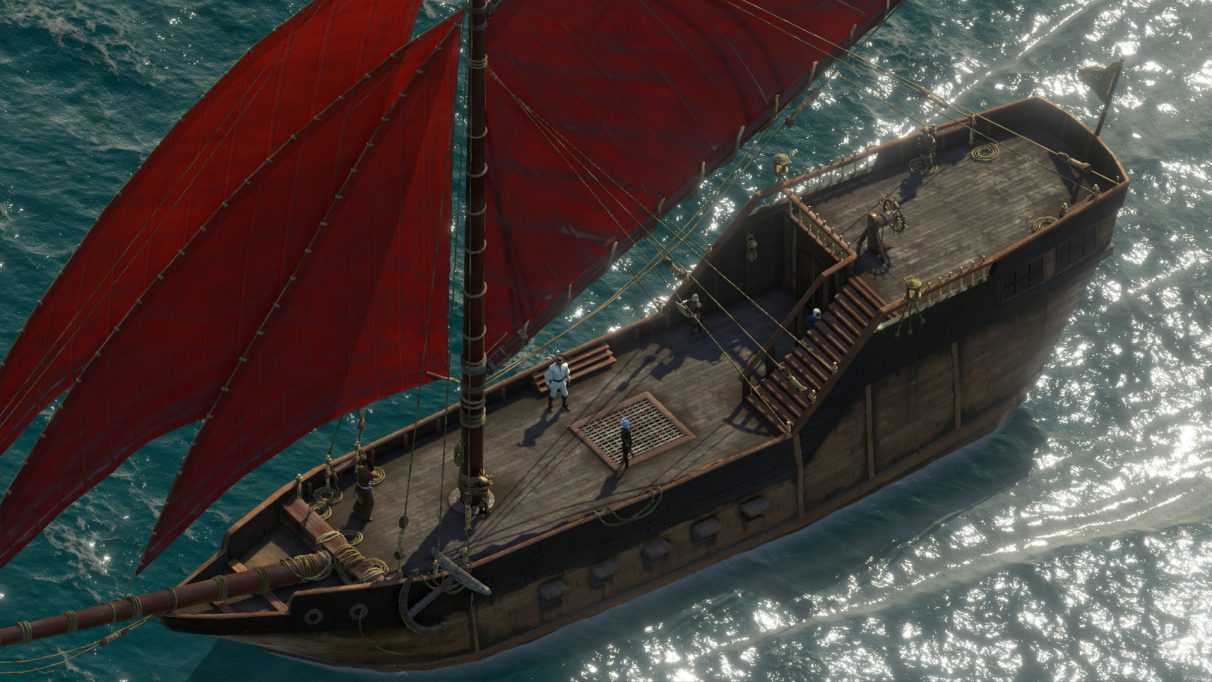 Ahoy there, you salty sea dog! We ‘ear that ye want to be a filthy cutthroat pirate. All right, but you don’t become a pirate just by asking. You’ll ‘ave to play, the best pirate games! In each one, you’ll have to master the sword, the art of thievery, and the quest. What? That be treasure hunting, ye sea urchin!

So if ye want to prove yerself that yer pirate material, ‘ere be the ten best pirate games that we think are good trials. Aye, even being a pirate in space counts, because swashbucklin’ ain’t reserved for just the seven seas.

We’re using the following conditions as an indicator of whether or not a game can be included in this list of the best pirate games: It is set in either colonial times or space, has pirates in it either alive or dead, and in most cases contains references to looking for treasure or salvage alongside ship combat, or having a crew/fleet of ships to manage.

The best pirate game to start off with has to be one of the Monkey Island series, and for us, it’s a tight toss-up between the first three games. We’ve gone with The Curse of Monkey Island because it best combines the humour the series is known for, while also having the best representation of bein’ a pirate.

As any self-respecting pirate would tell you, you’ll need the gift of the gab. Curse Of Monkey Island includes a part where you sail the seas with your crew, finding pirate ships to raid, before engaging the captain of those ships in a duel of swordplay and puns. The first Monkey Island adventure had insult duelling too, but The Curse Of Monkey Island has rhyming insults, which makes it a far more fitting test for every rookie pirate.

For those buccaneers who have a crew of friends, Sea Of Thieves is the ideal pirate game. It tests all the necessary genre skills: dueling with swords, firing cannons, and firing your crew out of cannons. There’s also a lot of plunder waiting to be dug up and placed in your hold, before being taken back for rewards and upgrades to… your ship’s cannons.

Sea Of Thieves is an open-world multiplayer game, so naturally there’s a deep emphasis on ship-to-ship combat against rival pirate crews. Before long, one crew will be sent to Davey Jones’s locker, while the other will be gathering all the spoils. It’s a bit of a long haul and one you’ll need a reliable crew to get the most from, but thankfully the Xbox Game Pass includes Sea Of Thieves, so the barrier to entry isn’t massive, and the community is atypically friendly.

For those who want to take a fleet of scallywags across the Caribbeanbut don’t want the hassle of needing other real players to join their crew, Sid Meier’s Pirates! will make you into the next scourge of the seas. We’ve gone with the one from 2004 rather than the 1987 version, because it’s a better version of the all the same concepts – not to mention easier to find and get running on a modern PC.

You begin as a fledgeling buccaneer, with only one ship to your name. In order to build your pirate fleet, you’ll need to raid other ships, recruit a crew to man your cannons, and duel pirate captains. You’ll also be doing favours for one of four nations, as they try to build a foundation for a colonial empire. It has a bit of a dated look, but it’s stylised enough that it doesn’t matter too much, and it’s the ideal strategy pirate game.

Let’s face it, being a pirate is no child’s play. There’s too much grog to be had after all. So for the younger swashbucklers out there, one of the best pirate games is Lego Pirates of the Caribbean. It is one of the earlier Lego games, but the core template of is the same: you’ll leap about, you’ll build items of scenery, and you’ll complete a bit of light combat and puzzling. Plus, having the Lego figures unable to talk in these early games only made them more charming.

The game takes place across scenes from the first three Pirates Of The Caribbean films, and if you’ve got a baby pirate by your side, you can jump in with a second player at any point. Useful should your protege be struggling with a nefarious wastrel and need your help – though they only lose a tiny bit of their treasure haul if they do get defeated.

Okay, assassin’s aren’t pirates, but Kenway, the protagonist of Black Flag, is both. You run a ship, raid frigates and sloops for treasure to spend on upgrading said ship, and even sail through treacherous storms. Ubisoft are now making a game called Skulls & Bones, hopefully coming soon, which is a multiplayer-focused pirate game based on what Assassin’s Creed IV: Black Flag did, but in the meantime, this is a good way to get your sea legs. It’s a great pirate game – there are sea shanties for yer crew to sing and all – and in many ways the best Assassin’s Creed game.

So your plunder is running a bit low. Not to worry, there’s a bit of buried treasure in Steam that’s fitting for anyone willing enough to find it. Sticks & Bones is a silent comedic pirate game where the pirate must continue on his quest to find plunder. He’s also a bit on the dead side, but when has that ever stopped a pirate from a good bit of treasure hunting?

It’s not a very long game and is meant to be an episodic adventure, but don’t let that stop you. It’s a slapstick romp that’s likely to put a smile on even the saltiest of sea dog’s face. Heck, it even got “The Daddy” award from our video team in their Reviews Roulette series – and as everyone knows, Matthew Castle is the saltiest sea dog we have at RPS.

Space is the final frontier, as a great captain once said, meaning that even examples of space piracy can be counted among the best pirate games. The robot inhabited universe of SteamWorld has plenty of derelict and manned spaceships to raid and space pirates to shoot with your high-tech weapons. This turn-based game encourages skill shots by ricocheting bullets off walls, all while looting new stuff for your crew.

As a 2D game, it’s easier to aim your weapon, particularly if you’ve got laser pointers attached. It’s also a great tactics game, with a colourful crew of characters. And you can shoot enemy’s hats in order to get new headgear, which no self-respecting pirate could resist.

Perhaps you like your space piracy to have a bit more space combat? The first Space Pirates And Zombies was an excellent top-down shooter and the superior game of the two, but the sequel has more of a space pirate vibe to it. Your crew will need to scavenge abandoned crafts, looking for parts to upgrade their ship, while taking out bandits and forging alliances with the factions.

The combat feels like an arcade game, and has you manning lasers and guns in fast-paced dogfights. If the campaign doesn’t suit you, there’s also a sandbox mode where you can forge your own path to building your space pirate empire. While zombie invasions aren’t exactly in keeping with the pirate theme, the crew of your ship is full of disgruntled scoundrels and the game is a fun time without getting too complicated.

Back to Earth now. While sailing the seven seas is what we associate them with most, there’s more to the pirate life than just hunting treasure. The likes of Edward Teach were feared throughout the Caribbean not just because they were ruthless killers, but because they built alliances with other pirate crews to establish pirate colonies.

Enter Tropico 2: Pirate Cove, where you take on your own island paradise. To create it, you’ll need to send a fleet of pirates to intercept cargo vessels in order to capture prisoners to work on your island, and to build the coffers of your treasure chest. You’ll also have to create a delicate balancing act as your slaves and pirates do not get on if they’re too closely integrated. All the while, you’ll need to ensure that the three nations in the Caribbean don’t find your island and destroy it. It’s showing its age a bit these days but still worth revisiting.

If you only played the first Pillars Of Eternity, you might be wondering what this is doing here, but I’ve not bumped my head on the poop deck, I promise. Deadfire is still an isometric RPG in a trad-fantasy world, but straight after the opening – which handily recaps the events of the first game – your protagonist wakes up on a ship. Your ship. What follows has you traipsing around on land and assembling a party of quest-craving D&D types just as normal, but that party joins your pirate crew. You’ll sail with them from island to island, and at sea you’ll need to out-sail, out-cannon or out-fight your rivals.

There’s a whole crew management aspect to the game as well, going far beyond the typical RPG party management stuff, in which you can hire people at ports, send the injured to your ship’s surgeon, and manage your food, drink and medical supplies. There have been a handful of attempts at making a deep pirate RPG, but Deadfire is one of the few that succeeds.

And those are our picks for the best pirate games. There should be a mix of genres to choose from, but if you feel we missed your favourite, you can make a case for it in the comments below.