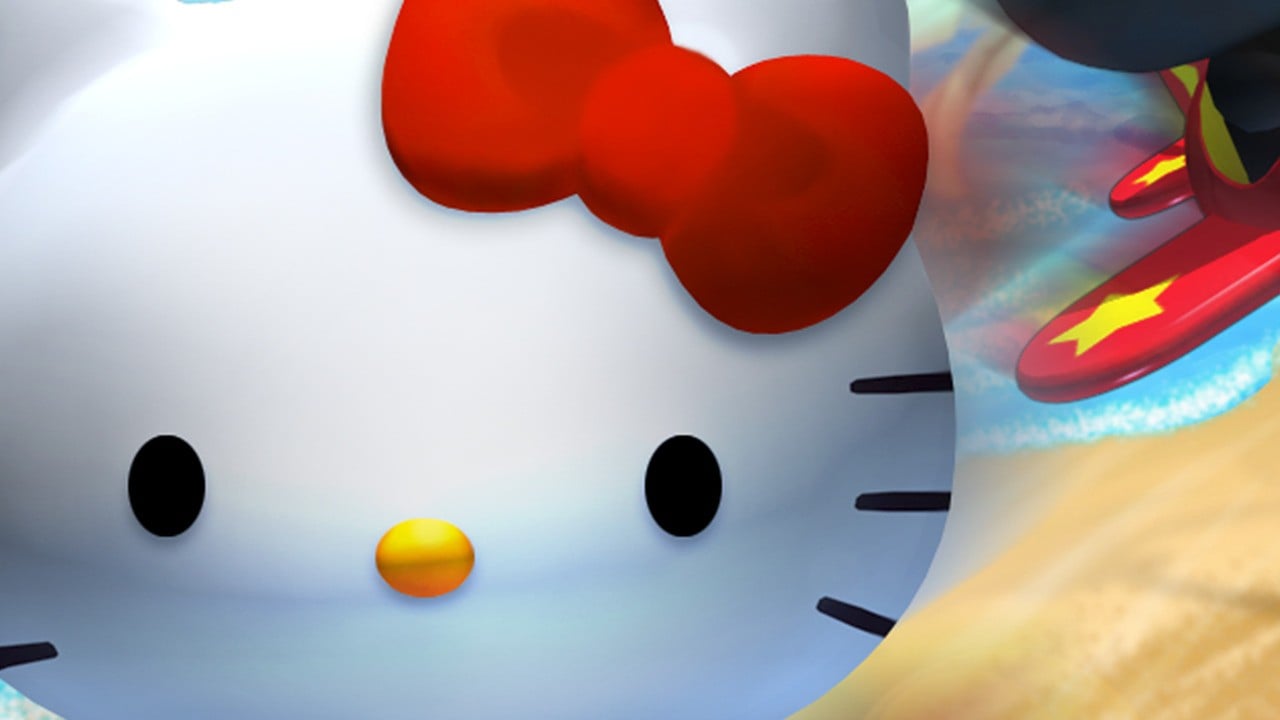 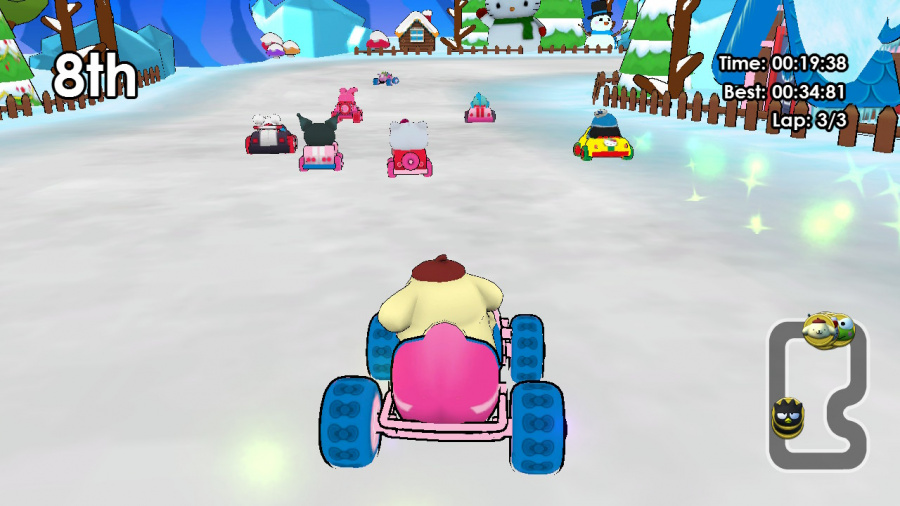 It’s odd what passes for rare these days. Take Hello KItty Kruisers, for example; released physically on the Wii U in limited numbers, it can be bought on the Wii U eShop for a mere ten bucks and yet the boxed version regularly sells to collectors for upwards of $60 online.

Thankfully, the game has now meandered over to the Switch eShop too, so you can now easily buy it here if you’re craving your fix of Sanrio-themed racing goodness. Not that you should be, when you consider that what we have here is actually a fairly rubbish game.

Hello Kitty Kruisers with Sanrio Friends (to give it its formal weekend name) is a kart racing game, because of the unwritten law that decrees that all licensed characters from Mario to M&Ms have to get behind the wheel at some point in their lives. There are 10 Sanrio characters to choose from here, ranging from Hello Kitty herself to the likes of Keroppi, Badtz-Maru, Tuxedosam and Hangyodon. 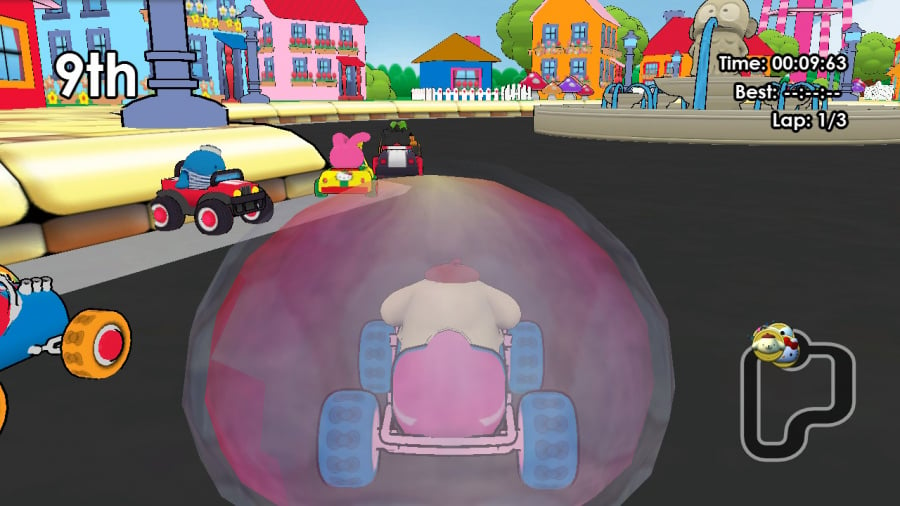 If you’ve heard of all those characters before you may already have one hand on your wallet, but cool your jets: it’s all downhill from here. The fact that you even have a wallet in the first place means you’re probably older than this game’s target audience, but we’ll get to that in a second.

A karting game would be nothing without vehicles (unless it’s Sonic R), and there are a decent selection here. The game actually takes place on land, air and sea, so you’re actually given a variety of cars, planes and boats to choose from. Each category consists of ten different vehicles, and although many of them are similar in design, their garish colours are varied enough that they do still feel like distinct choices – even if we couldn’t really notice a difference in performance between any of them. 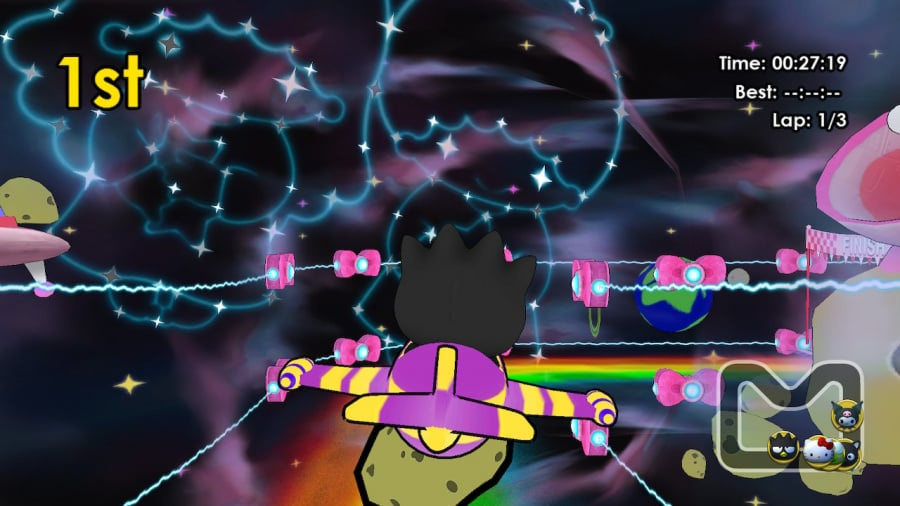 As well as the normal racing there’s also an Adventure mode, which consists of 20 different missions. Again, that number seems more impressive than it actually is, because it’s really just four different tasks split across the five environments: collecting a set number of cupcakes, collecting a set number of apples, going through a series of gates or finishing a lap within a certain time limit. You’re looking at around 45 minutes to complete this mode (which is needed to unlock some of the vehicles).

As is always the case with karting games, then, it all comes down to how it handles on the track, and this is where things go down a gear. The handling is functional enough, but the power sliding feels a little off. You hold down a shoulder button to drift, and when you let go the kart will immediately zip off in that direction; in principle this is a perfectly fine way of doing things, but the problem is that the camera doesn’t turn along with you – as your character drifts you continue looking straight ahead the same way you were looking before.

Worse, though, is the game’s speed. This is one of the slowest racing games we’ve ever played. Whether you’re in car, boat or plane, your top speed is about in line with that of a turtle crawling through quicksand, and the few moments of relief you get driving over speed boosts are nowhere near enough to make up for the painfully mundane pace you usually have to suffer. 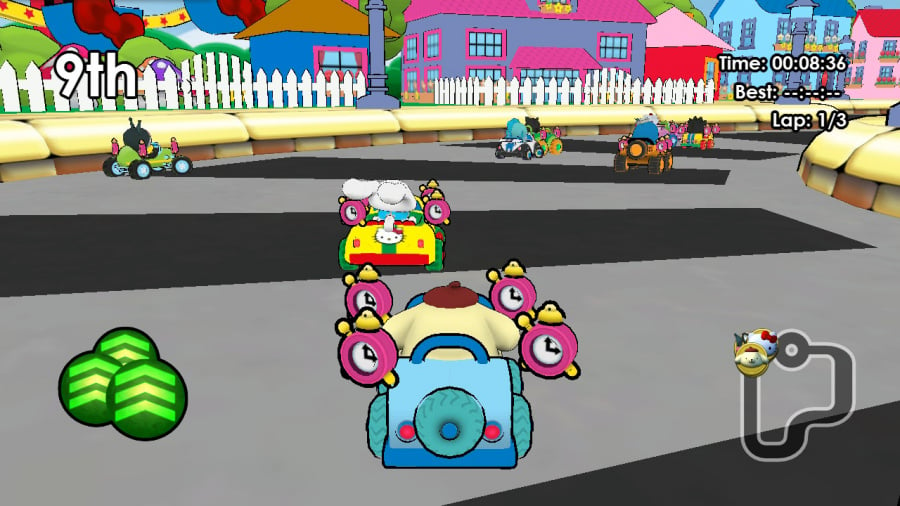 This would be all well and good had this just been the initial speed setting, almost like a 50cc equivalent in Mario Kart. The reality, however, is that there are no speed or difficulty settings in Hello Kitty Kruisers: what you get is what you get. And given that a large portion of the audience for this game will (understandably) be young children, that means anyone with a modicum of racing game experience is forced to play at a difficulty level that caters primarily to 7-year-olds.

The problem is that Hello Kitty is a brand that’s been popular for decades. In 1990s America in particular, Hello Kitty was massive, with the likes of Christina Aguilera, Mariah Carey and Tyra Banks endorsing Sanrio merchandise. There are a large number of Hello Kitty fans who aren’t young children, and the needs of these fans simply won’t be met here. Unless you’re happy to play a game that moves at a snail’s pace and can be 100% completed in around two hours, this is going to feel severely lacking.

Let’s be clear, though: if you have very young children then this is a perfectly suitable choice for their first-ever kart game. It may not have the handling or acceleration assists that Mario Kart 8 Deluxe does, but the pace is so slow and the AI so hapless that they’ll never feel too overwhelmed. Its bright colours and sharp, cel-shaded visual style will also appeal to children who already love all things Sanrio. If your age is in the double digits, though, you’re seriously going to struggle to get much out of it.

We like Hello Kitty as much as the next guy, but unless the next guy’s 7 years old they’re not going to be able to squeeze much fun out of this one. Nothing it does is particularly terrible (other than its odd drifting mechanic), but everything’s so slow and so easy that a huge proportion of the Hello Kitty fanbase will be bored to tears within the two short hours it takes to unlock everything.