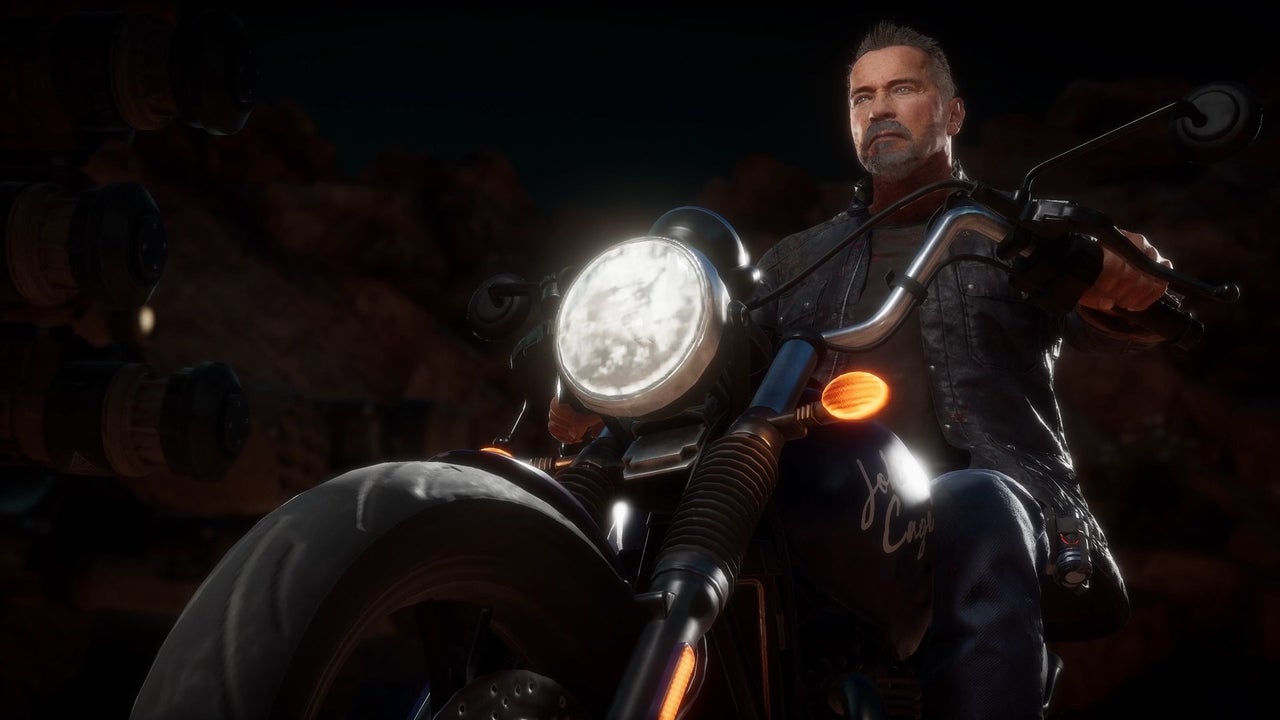 Netherrealm has a stellar reputation to live up to at this point when it comes to its crossover guest characters, with previous Mortal Kombat games hosting the likes of Freddy Kreuger, Jason, Leatherface, and a Xenomorph, not to mention Teenage Mutant Ninja Turtles’ cameo in Injustice 2. The newest, Terminator in Mortal Kombat 11, doesn’t break this trend of greatness. The T-800 Terminator is one scary fighter, capable of dealing off-the-charts damage that is appropriately balanced by a sub-par neutral game and generally slow attacks. He looks and plays exactly as you’d expect him to, even if he doesn’t sound it. This is one of the most mediocre Arnold impressions I’ve ever heard.

First thing’s first: Terminator hurts. A lot. His damage potential is easily in the upper echelon of Mortal Kombat 11’s roster, especially if he has his Infiltrator Toss air-grab equipped, which is part of his first competitive variation. For one bar, he can do about 36-38% damage. Throw in a second bar, that’s about 43%. Pile on one of his relatively simple-to-land Krushing Blows and you’re looking at nearly 50% of your life bar terminated in a single combo, without even bringing in a fatal blow. What’s great is that these combos aren’t even all that hard to land, so if you’re looking for a character with big, satisfyingly damaging combos without a high technical barrier, Terminator might be your man-bot.

Of course, this kind of damage output needs to be tempered somehow, and fortunately, Terminator does have a few glaring weaknesses to balance him out. For one, he’s very slow and lacks a good far-reaching mid attack, which means he can be easily out-ranged by players with a good handle on space control. In addition, his main combo strings are easily beaten out by fast attacks, which makes them a little tricky to just throw out in the wild; and while he has a few solid projectiles and a shield that makes him projectile invulnerable, he has a tough time getting in on those intent on keeping him out. He’s a character that basically lives or dies by whether he’s able to get in close, knock the enemy down, and stay there.

Thankfully, he’s been given the tools to do just that. To get in, he has a safe-on-block leaping overhead that knocks the opponent down. Once he’s in his comfortable range and is able to put on some wake-up pressure, Terminator is a mix up machine. Just to give an example: most of Terminator’s big damage comes from a low-to-overhead combo string that can be special-canceled after the first hit into either a command grab, or his low-hitting Cyber Rift special move, which also comes equipped on his first competitive variation.

He’s a character that basically lives or dies by whether he’s able to get in close, knock the enemy down, and stay there.

To break that down, the opponent has to guess whether to block the overhead, the low attack, or either jump over, duck, or interrupt the command throw. The most likely option is the overhead, since it’s safe on block and leads to big damage, but if you keep blocking the overhead and keep getting hit by lows or command grabs that damage adds up very quickly.

Most of what I’ve talked about so far covers his first competitive variation, but Terminator has some interesting tools on his other variations that change up his gameplay substantially. His second competitive variation revolves around a move appropriately called “The Running Man,” which causes Terminator to sprint forward, giving him the option to use either a launch that leads to combos in the corner, a mid-combo ender, an unblockable running command grab, or just cancel the run and use it to simply close the distance. It’s a variation that trades some of his damage for a bit more of an unorthodox playstyle.

His third variation is even wilder than that, giving him a brand-new mechanic in the form of a pair of grenades. One grenade can be enhanced to pop an opponent up for a combo, and the other grenade is unblockable and causes a lengthy debuff that prevents the opponent from using their meter. That’s huge because it not only prevents enhanced special moves, but also removes the ability to use get up attacks and rolls when on the ground. The catch is that Terminator can only carry two grenades at a time, and once he runs out he needs to wait a couple of seconds before they come back to him.

Each variation offers an interesting tradeoff, and while I personally prefer the simplicity and high damage of his first variation, there’s a lot to like across the board.

Beyond his competitive variations, it’s also worth noting that one of Terminator’s moves is wholly unique, in that if it’s equipped, it will cause him to shed his human skin, exposing his metallic endoskeleton once his health dips below about 10%. It’s a purely gimmicky move, but at least it’s a very cool gimmick.

The only real downer about The Terminator is that again, while he looks spectacular, his voice just feels off. He may be modeled after Arnold Schwarzenegger’s face, but it’s definitely not actually him doing the voice behind it. The impression isn’t that strong to start, but every line also feels like it’s read with the exact same monotone delivery. I get that the Terminator is a cyborg, but Arnold didn’t say every single line in the movies with the same rhythm and cadence. He was a machine, but he could still pass as an actual person. This guy stands out like a sore thumb.