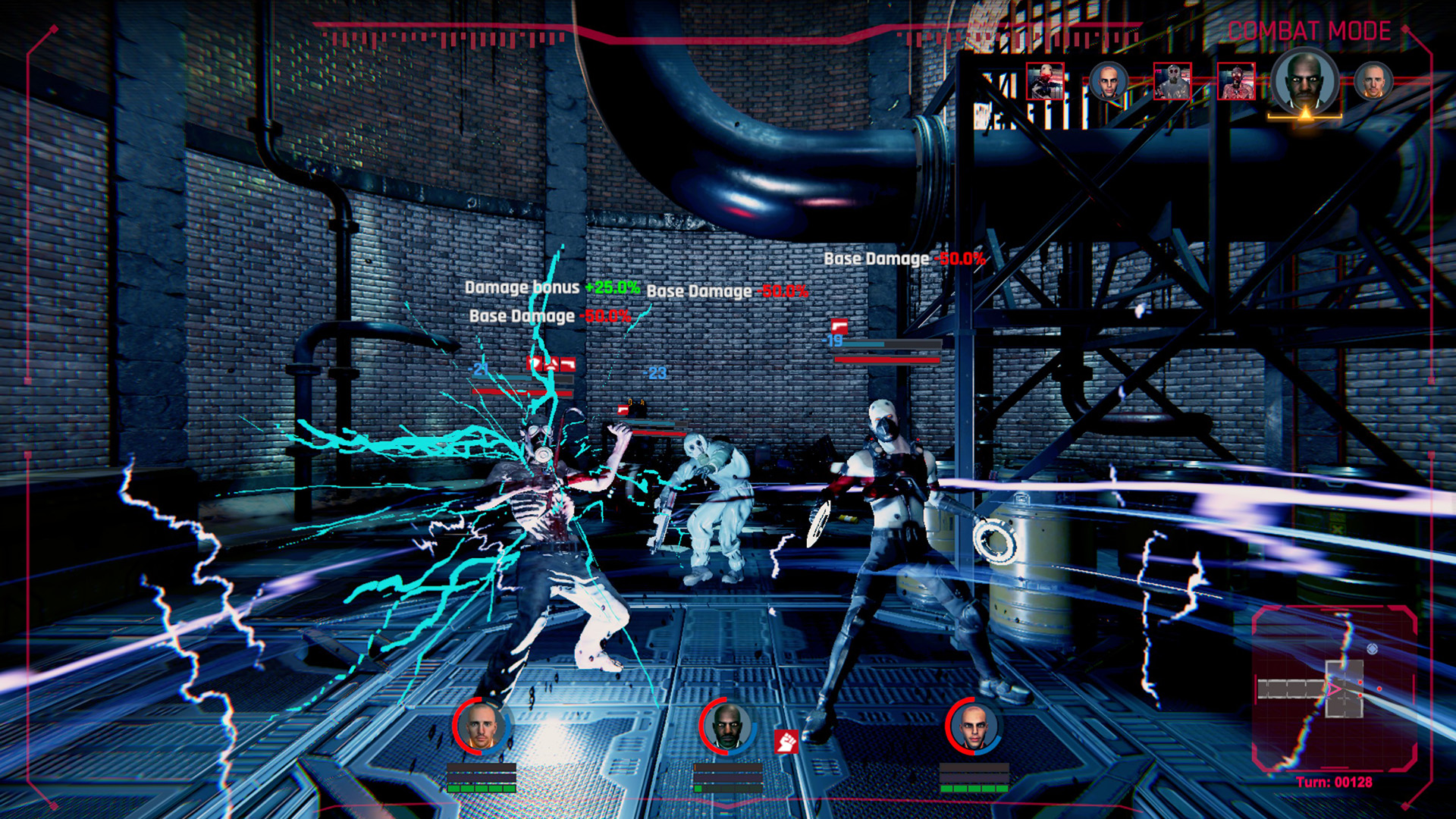 Conglomerate. Even the word sounds sinister, like it might throw a burlap sack over your head and bungle you into the back of a blacked out minivan, then pop you in the temple with a silenced pistol and throw your corpse out in the street in front of your mother’s house. Whether it’s the militaristic association of the glottal “cong”, or the overcast bleakness of the central “glom”, from start to finish the whole deal exudes a menacing kind of energy. Of all the words that I know, which is literally dozens, “conglomerate” is the one that seems the most up to no good. If I had a son and I wanted him to grow up bad, I would name him James Conglomerate and only let him watch business news.

Conglomerate 451 is a cyberpunk dungeon crawler set in a futuristic world containing, presumably, no fewer than 451 different conglomerates. That is both a frankly terrifying number of conglomerates to have to contend with, as well as antithetical to the tendency of conglomerates to, well, conglomerate. It is a turn-based, grid-based, clone-based, squad-based strategy management game, in which you command a small crew of genetically engineered super soldiers in an attempt to destabilise and undermine an inclement neon city’s autocratic league of corrupt companies. The action unfolds in the manner of Dungeon Master and Legends of Grimrock, with your team of three expendable vat-grown clones afflicted with some miserable condition that prevents them moving diagonally or less than 15 feet at a time. 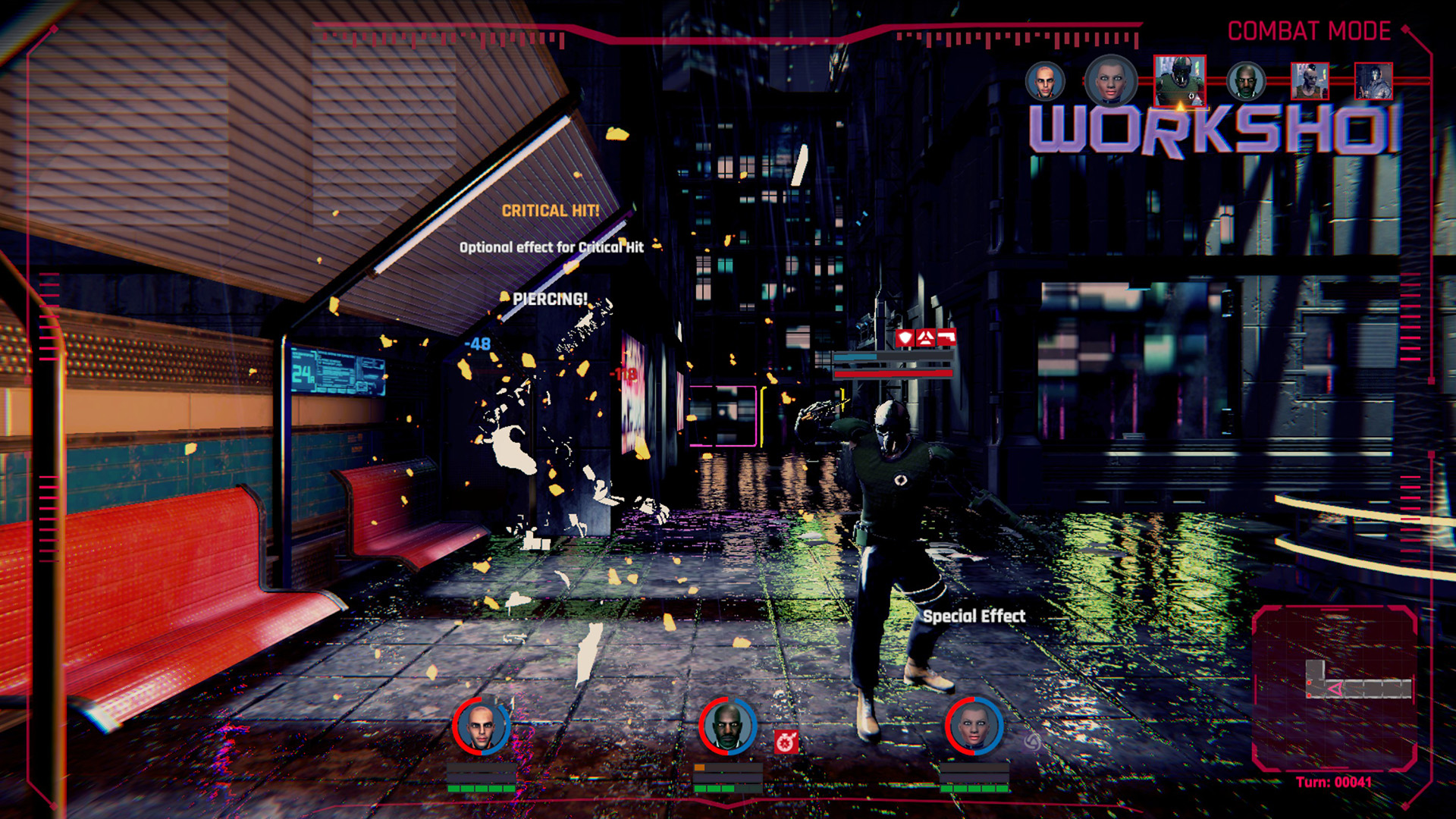 It’s a lesser-spotted genre that’s more often found hanging out in medieval fantasy environments, your treasure strewn dungeons and skeleton-buggered crypts and the like, but the ninety-degree angles of the rain-slick alleys and steel suspended walkways of cyberpunk dystopia lend themselves just as readily to grid-based adventuring. In fact, pretty much everything readily transposes itself from one setting to the other.

Magic spells become that vaguely explained techno-bio-wizardry that every cyberpunk future seems to have, with your soldiers able to zap and stun enemies with electrical attacks, hack into baddies’ brains to fiddle with their accuracy, and raise up magneto-shields in front of their allies. Potions become drugs, which your clone soldiers can become addicted to if they’re dispensed too liberally. One drug is called ‘crisps’ and removes all debuffs, for example. 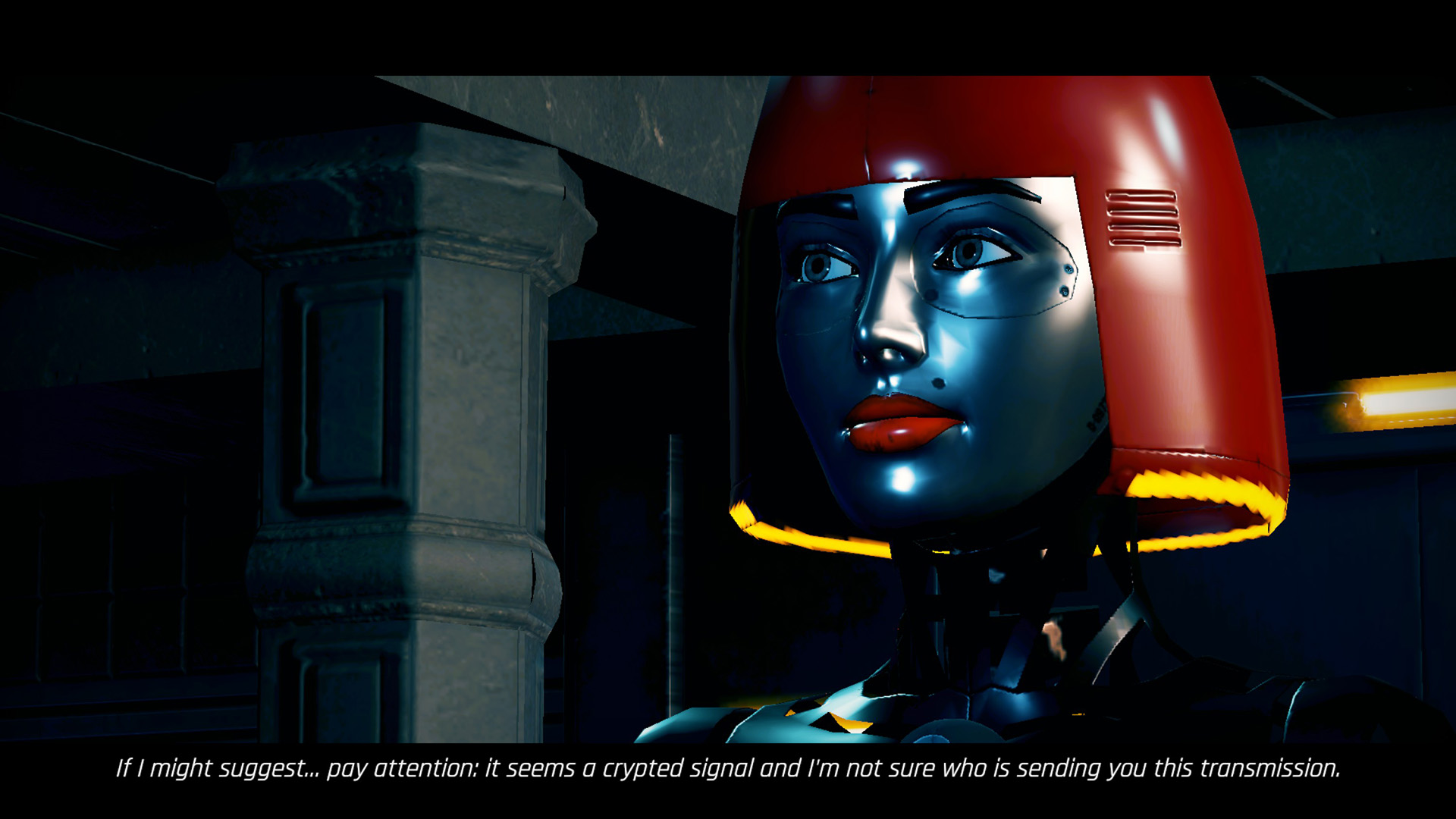 Gold is credits. Chests are hackable terminals. Instead of orcs and kobolds you’re battling criminal gangs with welding helmets and pointy hair and bionic limbs and PVC tights. Or private militias employed by the companies whose influence you’re chipping away at. Or humanoid robots in the thrall of a psychotic artificial intelligence. Or mutants who live in the irradiated sewers and can smear you in their glowing radiation juices. There’s hardly an original thought to be found anywhere in Conglomerate 451, but that’s alright, as the trade-off is a world that’s immediately comprehensible to anyone who’s ever glanced at a Bladerunner poster.

If there is a unique guiding principle to the game’s perpetually dark and wet world, it’s that shadowy unaccountable conglomerates are bad news, and that one day we’ll be able to 3D print new people at some unmentioned cost to our humanity. At your X-COM style base, of which you are the director, you can clone fresh soldiers to replace dead ones at the push of a button, imbuing them with the latest DNA modifiers and bionic limbs you’ve found inside of a cash machine or hidden under a bench during a mission. You can also send your clones off on their own automated, clandestine missions for some extra credits, as well as another currency, tech, which as far as I can tell is just credits with a different icon. Both are used to research new abilities for your base and your clones, such as regeneration and detox tanks to keep them alive a little longer. 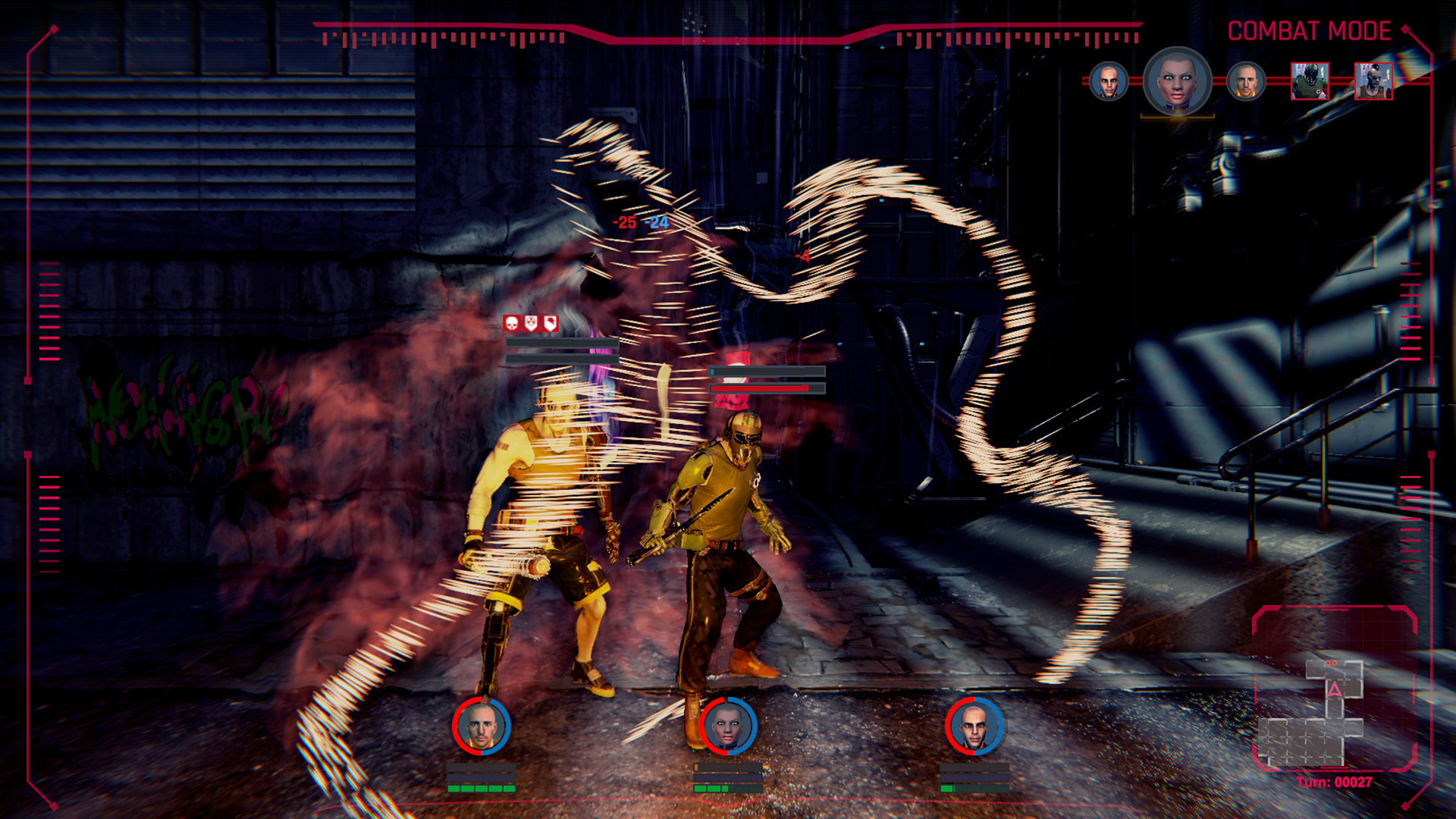 Combat during missions is politely turn-based, and the skills of your team generally tend to complement and lead into one another. One class of clone is tuned towards marking and stunning enemies, which in turn boosts the damage inflicted by a more assault-focused class. But for all its outwardly tactical notions, these encounters unfold at a snail’s pace. And not some kind of super-quick bionic snail from the future, just a regular crap snail.

Enemy shield and health bars can take an age to whittle down and battles typically devolve into picking the same two or three moves each round and repeating them until everyone on the screen is murdered. There’s a whole spreadsheet of stats and modifiers chugging away under the bonnet, and while you can do tricksy things like target individual limbs to inflict certain effects – shooting at an enemy’s legs to slow them down, for example – it’s never necessary to do anything other than blast away at the part of the body that’s most easy to click on in a given turn, or to follow the uncomfortably natural compulsion to always aim for the head. There are many parts to Conglomerate 451’s combat, but few of them hang together usefully, or in a way that provides a meaningful challenge. 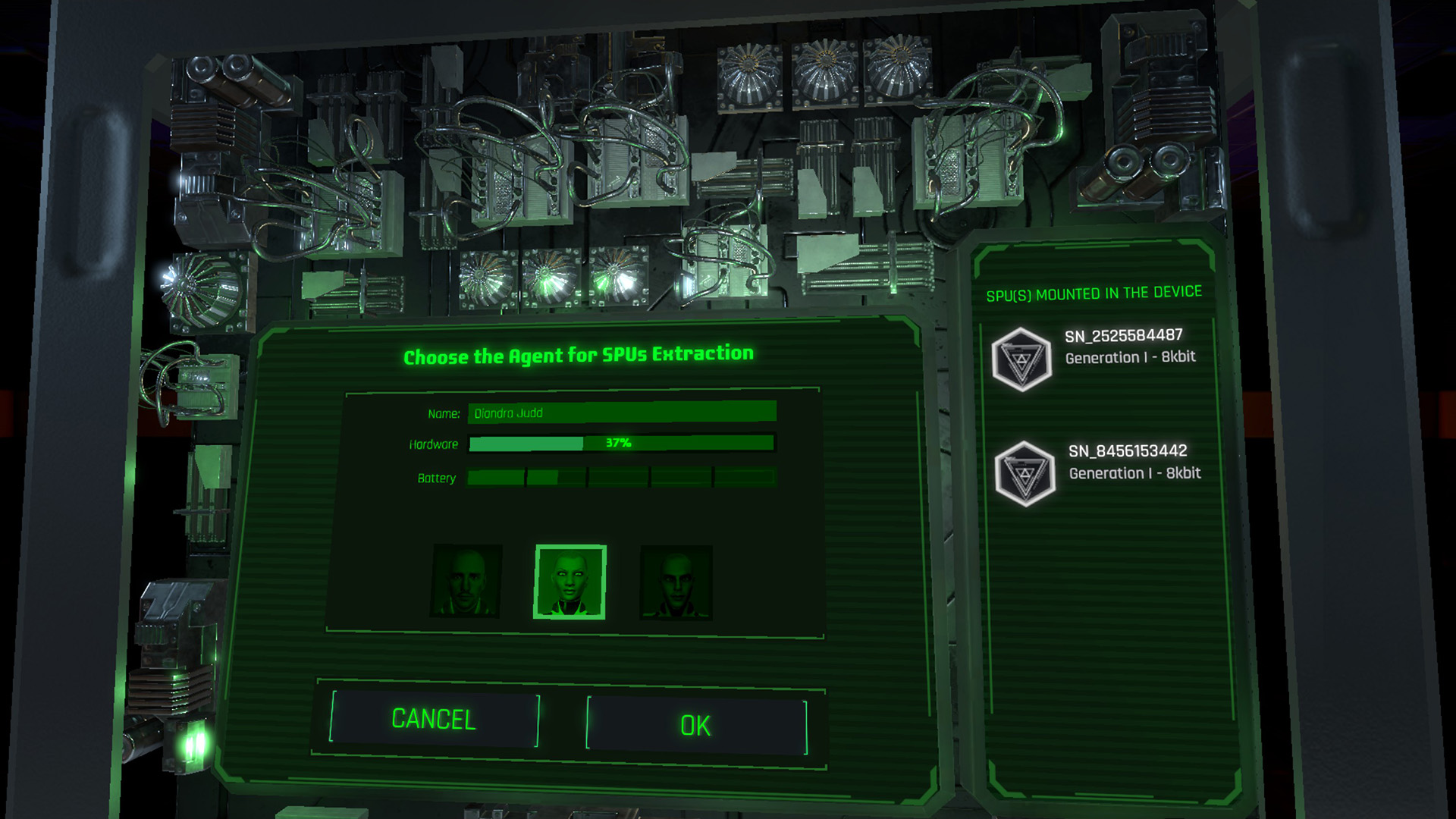 The juddery clunkiness of the game’s combat is carried through to broader issues with the user interface, which actively thwarts your efforts to understand some of the game’s basic mechanics. The different classes of clone each have names like Infiltrator and Binary, but no tool-tips to explain what their deal actually is. Instead it’s up to you to poke around their set of abilities in an attempt to divine their role in a team. Another example is how, in combat, the game optimistically expects you to weigh up the pros and cons of a never-ending range of inscrutable, fiddly debuffs. Many of these problems are being addressed in a series of fast arriving and significant updates, but some are baked right in.

Conglomerate 451 is a daunting and technical cyber-dungeon-crawler, but underneath all of its shiny PVC jumpsuits, neon signs reflected it puddles and hairless cloned men with dead, staring eyes, there’s just not much heart. Just endless cold, wet concrete.

Also, I’ve just looked up the etymology of “conglomerate”. It actually means to bring things together into a big ball, which makes it way more friendly sounding than the thing with the burlap sack and the murder. If I ever had a daughter and I wanted her to be ace, I’d call her Julia Conglomerate. Thanks.